I guess it really is true. No matter how rough the season has been, it still feels so good to beat your rival. The Green Bay Packers defeated the Chicago Bears Sunday in what honestly was a meaningless game. A 3-9 team vs a 4-8 team definitely deserved to be in the noon slot on Sunday with a broadcast team that seemed like they really hadn’t done a lot of research outside of stat-lines. But the Packers week 13 victory still proved oh so sweet.

I’m not going to sugar coat it. The start of the game was very irritating. Our defense couldn’t seem to stop anything, and our offense was just plain stale. It almost seemed like we were doomed for a repeat of last Sunday night’s match against the Eagles. Especially after Justin Fields torched the Packers defense for a 55-yard touchdown run. That was painful to watch. But no matter how terrible it seemed; the Packers were somehow still in the game. It definitely felt like a traditional Packers vs Bears showdown where no matter what, both sides would not give in.

It’s only the 5th time this season I get to write this weekly article after a win, so I’m going to savor it, here are your Packers Week 13, Toasts and Roasts.

This is Christian Watson’s fourth straight appearance in the Toasts category. I feel like I should just assign him a permanent beer, but that would just take away the fun. Three catches for 48 yards and a touchdown, and then tack on a 46-yard run for a touchdown as well. Dare I say that Christian Watson has become a star on this offense. The excitement he has brought to this rough season so far has been a breath of fresh air.

This week, I’m toasting Christian Watson with New Glarus’ Enigma. This is an interesting beer. It’s kind of a smoked sour beer that goes down like a brown ale. It was made to be mysterious, and mysterious is what it is. But also, very outstanding to drink.

I picked this beer for Christian Watson because getting him going this season was somewhat of an enigma in itself. Of course, there were the injury woes that plagued him at the start, but it also felt like the Packers weren’t exactly sure what to do with him. But they’ve now solved that enigma, and he has become one of the best players on the field.

So, David Bakhtiari woke up with some chest pains on Friday. Thought he had strained his abdomen until meeting with team doctors ended in him having an appendectomy. This meant he would be out Sunday. The Packers didn’t blink an eye because they knew they had Zach Tom ready to go in his place. Tom had a good game in relief. He only allowed one pressure to Aaron Rodgers’ blind side the whole game. He also showed up on the highlight reel during AJ Dillon’s 21-yard touchdown when he set the edge keeping Al-Quadin Muhammad inside as Dillon broke for the score.

I’m going to toast Zach Tom with New Glarus’ Serendipity. That’s right, a second New Glarus beer this week. And if you’re a common frequenter of this column you’ll know I love myself some New Glarus, they’re my favorite brewer. However, this just fits. Serendipity was started back in 2012 when a severe drought occurred in Wisconsin, and the cherry crop failed, meaning no Belgian Red beer for the brewery. New Glarus grabbed what cherries they could, some apples, some cranberries, and created Serendipity. This excellent beer became a delicious happy accident.

Zach Tom receives Serendipity because he’s mainly found his success in relief of injury. The Packers most likely did not want to have Zach Tom start so many games this season, but he’s come in and proved to be an outstanding lineman. So, Tom’s success has been a Serendipity that the Packers are glad they found.

Quadzilla has certainly shown up to the party these last two games. Good, if we want to win out, this is the time of year for him to have a breakout. The temperatures are dropping and tackling a 6’0 250 pound running back is going to be tough. Dillon rumbled his way to 93 yards on 18 carries with a touchdown and 26 yards through the air with 3 catches. This was especially valuable given that Aaron Jones was a bit banged up in the game. Dillon at times put the offense on his back and made sure drives were extended.

I’m toasting AJ Dillon with one of my favorites this time of year, Lakefront brewery’s Brandy Barrel Aged Spiced Winter Lager. This lager is coupled with cinnamon, caramel malt, and clover honey flavors and then aged in brandy barrels over the summer and fall. It’s that traditional spiced winter beer but with that brandy punch at the end weighing in around 13.9% abv.

I chose this beer for AJ Dillon simply because it’s exactly what he can be this time of the year. He’s that perfect wintertime running back. He’s got that punch to knock you over like that brandy kick. And he’s also adding the spice when he can be effective in the passing game as well.

Jaire, just when I thought you were surely going in my roast’s column this week, you grabbed that interception that essentially sealed the game, and totally redeemed yourself!

This week, I’m not doing a full roast. If I were to do a full roast, it would be the running defense. But I’ve been a broken record lately on Joe Barry’s defense, so instead I’m doing a Roast/Semi-Toast.

Earlier in the game, Jaire Alexander was burned by former Packers Equanimeous St. Brown for a 56-yard catch. Then he was burned again by N-Keal Harry for 49 yards. It was looking terrible for him. But then he jumped a Justin Fields pass to EQ St. Brown and intercepted it to basically win the game. So, it was a half and half game for Alexander. He deserves a roast for his earlier play, but I’ll toast him for his redemption on that late INT.

Jaire Alexander is receiving Bell’s Oberon Ale this week. This is a wheat ale that mixes a spicy hop character with mildly fruity aromas. This is a good beer. But it’s also, kind of common. It depends on the way you view it honestly. It can be absolutely delicious, or it can be just another wheat beer.

Jaire Alexander compares with this beer because it’s hard to tell if he had a good or bad day. He had some bad moments for sure, but then it’s like he won us the game. That’s what Oberon is to me, it’s a beer that it depends on what mood I’m in. Sometimes it’s just okay, and other times it’s great. Regardless, I’m glad Alexander turned his day around.

Like I said before, it’s sweet to beat your rival regardless of the meaning.

The Packers will take this victory into a much-needed Bye week. I honestly can’t remember the Packers Bye week ever being this late. It’s a bit surreal. But if we are going to try to win out, and take a shot at the playoffs still, we’re going to need this Bye.

No matter where you are on this season, whether you think it’s a lost cause, or you think we still could have a chance, I hope you still enjoy seeing the Packers win. Soak it in, we haven’t gotten many Victory Monday’s. I know I will.

After the Bye, it’s on to the Rams. Whether we make a run or not, I’m still going to say it, Go Pack Go. 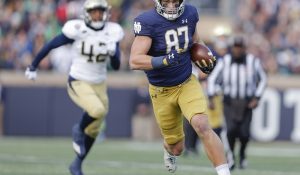