On January 13, 2005 the Green Bay Packers were in trouble on the field due to serious salary cap issues. Then on January 14, Ted Thompson was hired. His first job was to clear the cap, but his main role was to oversee a draft and develop team that had struggled mightily in the draft the prior seasons. His first pick was in the 2005 NFL Draft on April 23 2005.

He made his first selection 24th overall and took a quarterback from California. While that pick was questioned, ten years later we can look back and see why Ted is such a respected man. This series will look back on each of his drafts, pick by pick, and look at his successes, his failures, and all in between. We will analyze each pick while also looking at the best available players behind him. First up is that opening year of the Thompson era.

Before we get into the picks, we do need context. His first job was to clear up the salary cap, as the team was over budget heading into the offseason. He made three major moves that ruffled feathers. He let both starting offensive guards go in Marco Rivera and Mike Wahle. He also let leave a Pro Bowl safety and proven ball-hawk in Darren Sharper. The team was coming off three consecutive division titles, but needed some re-tooling. So, with that, let’s dive in.

ROUND 1 (Pick 24) – Aaron Rodgers, QB. California
Best available player: Rodgers
Let’s not cut to the chase. This pick was one of the best of all-time. Thompson took a major risk drafting the heir to Brett Favre with his first ever pick, and it paid off. Rodgers has become a two time MVP, a Super Bowl champion, and a future Hall of Famer. He currently holds records for career and single season passer rating (106.0 career, 122.5 in 2011), Touchdown to interception ratio (3.96), and interception percentage (1.6%). This isn’t bad for a late first round pick. We’re still waiting to see what comes next as Rodgers is at the still spy age of 31.

ROUND 2 (51) – Nick Collins, S. Bethune-Cookman
Best available player: Collins
Another home run pick for Thompson in what has to be seen as a great start to a General Manager’s career. Collins took some time to adjust to the NFL, but he started as a rookie and got better and better, peaking in 2008 when he recorded 7 interceptions and was named to his first Pro Bowl. He made the team again in 2009 and 2010 recording 10 more picks in those two seasons. He will be best remembered for his pick six in Super Bowl XLV that gave the Packers a 14-0 lead against Pittsburgh. He was seen as one of the top safeties in the game before he suffered a career-ending neck injury in 2011. His spot in the Packers Hall of Fame seems secure.

ROUND 2 (58) – Terrence Murphy, WR. Texas A&M
Best available player: Vincent Jackson, WR. Northern Colorado (61st overall)
A promising prospect who was a victim of bad luck, Murphy was seen as a great slot receiver and return specialist coming out of college. A record setter at Texas A&M, he got off to a solid start to his career, catching five passes in his first three games before he was injured on a helmet to helmet hit against Carolina. He was diagnosed with spinal stenosis, with is a narrowing of the spine, and retired shortly thereafter. Hindsight wonders what could’ve been. Vincent Jackson was still available despite being mocked to the Pack in the first round at different points in the process. Just think about V-Jax receiving passes from Favre and Rodgers. Shudder.

ROUND 4 (115) – Marviel Underwood, S. San Diego State
Best available player: Darren Sproles, RB. Kansas State (130th)
Underwood was a player who the Packers thought they could team up with Collins to have the backbone of the defense set for years. He played in all 16 games as a rookie, recording 35 tackles. Unfortunately for him, he tore his ACL in the 2006 preseason and was cut in 2007. He was signed back for a week later in the season, but was inactive. He last played football in the CFL in 2009. This was another case of a pick that injuries derailed. Sproles was available, but the Pack had Ahman Green, Najeh Davenport and Tony Fisher still on the roster.

ROUND 4 (125) – Brady Poppinga, LB. BYU
BAP: Sproles or Chris Canty, DL. Virginia (132nd)
Poppinga was seen as a project coming out of BYU. He was primarily a defensive end in college, but shifted to linebacker late in his senior year. Highly productive in school, he was a three-time all-Mountain West pick, and measured well at the combine at 6’3” and 250 pounds. He played in 15 games as a rookie, cutting his teeth on special teams and got some action as a pass rusher, recording 2 sacks. He became a starter in 2006 and remained in that role through the end of the 2008 season. He played in a backup role for two more seasons before he was released. He finished his career with St. Louis and Dallas. While Canty would’ve been nice, there’s no denying that Poppinga was a valuable player for the team for seven strong seasons.

ROUND 5 (143) – Junius Coston, C. North Carolina A&T
BAP: Trent Cole, DE. Cincinnati (146th)
This may be one that Ted wishes he had back after all these years. Coston was seen as a developmental project due to his small school stature, but had the raw ability to be a solid interior lineman. He played three seasons in Green Bay, starting 7 out of a possible 16 games, mostly at guard. He was released and never caught on to another team. By contrast, Cole was picked three picks later and amassed quite the career in Philadelphia with 85.5 career sacks.

ROUND 5 (167) – Mike Hawkins, CB. Oklahoma
BAP: Chris Myers, G. Miami (FL) (200th)
The only player taken in the 2005 Draft that wasn’t on Mel Kiper’s Big Board, Hawkins was a raw talent that came out of Oklahoma with little acclaim. Thompson pulled the trigger one year after Green Bay took two corners early in the draft, hoping to strike gold in the fifth round. Hawkins played one season in Green Bay, starting one game and making 13 tackles. He played with Cleveland in 2006 and then was done. The end of Round 5 was not really noteworthy, but if we are looking at the rest of the draft, Myers has developed into a Pro Bowl center in Houston.

ROUND 6 (180) – Michael Montgomery, DE. Texas A&M
BAP: Jay Ratliff, DT. Auburn
Montgomery was a dependable defensive end for a while in Green Bay. He spent the first three seasons as a rotational lineman, but got a chance to start 8 games in 2008. He re-signed in 2009, but struggled in 10 games of action. After getting cut by Minnesota, he returned for 2 games in 2010. In five seasons he started 8 of 56 games. Not bad for a 6th round pick. No one knew what Ratliff would do as Cowboy, but in hindsight…

ROUND 6 (195) – Craig Bragg, WR. UCLA
BAP: Joel Dreesen, TE. Colorado State (198th)
Bragg was a decorated college receiver who was too undersized for his role in the NFL. A possession receiver at 190 pounds, he never developed a vertical threat to his game and was relegated to the practice squad. He bounced around the league, never making an active roster. Not a great pick, but you can afford to miss in the 6th round.

ROUND 7 (245) – Kurt Campbell, S. Albany
BAP: Ryan Fitzpatrick, QB. Harvard
The only highlight of Campbell’s NFL tenure is that he was the first Albany player ever drafted. He spent 2005 on IR, and never played a down in the NFL.

ROUND 7 (246) – Wiliam Whitticker, G. Michigan State
BAP: Whitticker
Due the departures of Wahle and Rivera and the abysmal play of the other guards, Whitticker was forced into action as a rookie and was average in 14 starts. After 2005 he never played another game. This was a rare case of a late round pick starting as a rookie and then fading into obscurity. No team even looked at him after he was released in 2006. 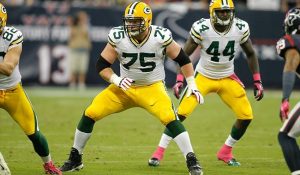 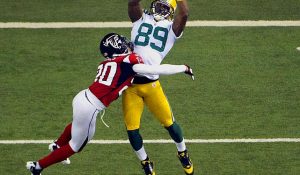 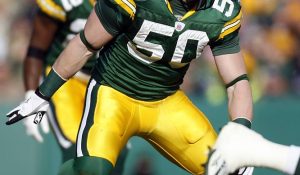