While there are certainly people out there who think talking about what-ifs are a waste of time, it’s generally a useful activity to take a look at what the Green Bay Packers might do this offseason (plus, there’s several weeks to fill until the Combine). I’m going to be running several simulations of renegotiations, cuts, re-signing, free agency, and the draft.

What I learned from the first version: I miscalculated the cap carryover (thanks for pointing that out in the comments). I went a little crazy on CBs, which would result in some very difficult roster decisions for the 5th Corner. Check out my first attempt here: https://packerstalk.com/2018/02/13/2018-packers-offseason-simulation/

I’d love to renegotiate with Cobb and Nelson, but there isn’t a ton of incentive for them to do that at this point.

I would keep Jordy despite his high cap number. I think his relationship with Rodgers is something that will allow him to continue to be productive further into his 30s. He also has the frame to transition from a speed receiver into a possession receiver.

S Morgan Burnett – 3 year, $8 million/year. I think Burnett is going to be one of the key pieces to Pettine’s defense. This seems like a high price tag, but when healthy Burnett is at or near Pro Bowl level. Plus the secondary needs a leader.

OLB Trent Murphy – 1 year, $3 million. Murphy was an emerging pass rush threat before he tore his knee up last year. I think he’ll look for a “prove it” deal somewhere, and Green Bay could certainly use great pass rushers.

QB Chase Daniel – 2 year, $3 million. It’s a lot to pay your backup (especially since Aaron Rodgers is about to break the bank), but having a veteran to turn to in case of injury can make all the difference in a season (see Eagles, Philadelphia). Daniel has been Brees understudy for a long time, and has played for Sean Payton and Andy Reid. He’s the perfect backup.

WR Tavon Austin – 3 year, $4 million. This projection had Austin getting cut by the Rams. He’s one of the most explosive athletes in the NFL, and would step into the Randall Cobb role. He doesn’t have the route running skills or hands of Cobb, but he does give Rodgers someone who can take the top off the defense and make plays on quick screens.

TE Trey Burton – 4 year, $7 million. I didn’t think it would take this much to get Burton, but I wasn’t willing to let him get away. When Zach Ertz has been hurt, Burton has looked like a star in the making. The Packers offense is completely different when they have a great pass catching Tight End. Speaking of…

TE Tyler Eifert – 2 year, $6 million. Eifert is truly one of the best TEs in the league when healthy. He’s not healthy much. But having a reliable player like Burton, would give the Packers the chance to use Eifert sparingly. Having two great TEs has created impossible matchups for a few offenses in the league, and the Packers could have the best duo of them all.

CB Nickell Robey-Coleman – 3 year, $4 million. Coleman had a great year as the slot corner for the Rams, and may be flying under the radar in free agency. He’s small (5’8” 178), but I don’t think Pettine is as allergic to small DBs as Dom Capers was. Coleman graded out at the 19th best CB in the league according to PFF, and could provide the Packers with a great inside cover option.

OLB Cassius Marsh – 3 year, $1 million. Marsh was terribly disappointing after getting traded from the Seahawks to the Patriots. He signed on with the 49ers and didn’t make much noise the remainder of the season. This is low risk signing (little signing bonus) for the hope that Mike Pettine can get something out of a guy who has pass rush potential.

ILB Kevin Minter – 3 year, $2 million. Minter was good against the run before his 2017 campaign was ended due to injury. He’s got some speed to cover over the middle, and several years of starting experience. He’ll be a good depth signing to help Blake Martinez on early downs.

1st – 14: LB Roquan Smith, Georgia. Smith is a game changing Inside Linebacker. I have my doubts that he falls to #14, but a run on QBs early in the draft pushed him to me. Smith would pair with Blake Martinez to form a formidable duo in the middle, and Roquan immediately becomes Mike Pettine’s favorite player.

2nd – 13: CB Mike Hughes, Central Florida. Hughes is incredibly fast and has great ball skills. His technique needs some refinement, but he has all the skills to be elite if he cleans his fundamentals up. He’ll also be an elite kick returner.

3rd – 37: C Frank Ragnow, Arkansas. Ragnow gives the Packers a backup Center and an option at Right Guard if no ones emerges for that job.

4th – 23: WR Michael Gallup, Colorado St. I didn’t need another WR, but Gallup is too good to pass up at this point in the draft. He has good speed downfield, but is also a good route runner. His tape screamed Packers receiver.

5th – 13: TE Ian Thomas, Indiana. Thomas has great combination of size and speed. He can sit behind Burton and Eifert while he learns the position and be a great contributor when he’s ready.

5th – 22: RB Kalen Ballage – Arizona St. I’m thinking Ballage will shoot up draft boards after the combine. He’s a freak of size, speed, and elusiveness, but he was not used a lot at Arizona State.

5th – 34: LB Shaquem Griffin – UCF. People will concentrate on him missing one hand. The fact is he is an outstanding football player who has great position versatility. Offensive Linemen are going to hate blocking him off the edge and he can make plays in coverage.

5th – 38: LB Jack Cichy – Wisconsin. Cichy’s injury before his Senior year will cause him to slide in the draft. Grading his Junior year shows the impact he can make. He’s not an elite athlete, but Cichy plays with outstanding instincts and really strikes when making tackles.

6th – 12: QB Riley Ferguson – Memphis. Ferguson has a lot of good QB skills, but he’s so rail thin, I’d be afraid to play him right away. A year on the practice squad and he could develop into a nice backup prospect.

7th – 14: CB Darius Phillips – Western Michigan. I don’t know how good Phillips can be as a cover man because of his size, but I’d love to take a gamble on an elite Kick and Punt Returner in the 7th round. He could develop into a really good slot corner with some seasoning.

7th – 21: OT Greg Senat – Wagner. Senat is a basketball convert. He needs some serious time to develop strength and learn the game, but he is an intriguing Practice Squad guy because of his athleticism. He’s probably more of a Guard in the NFL due to his height (6’1”). 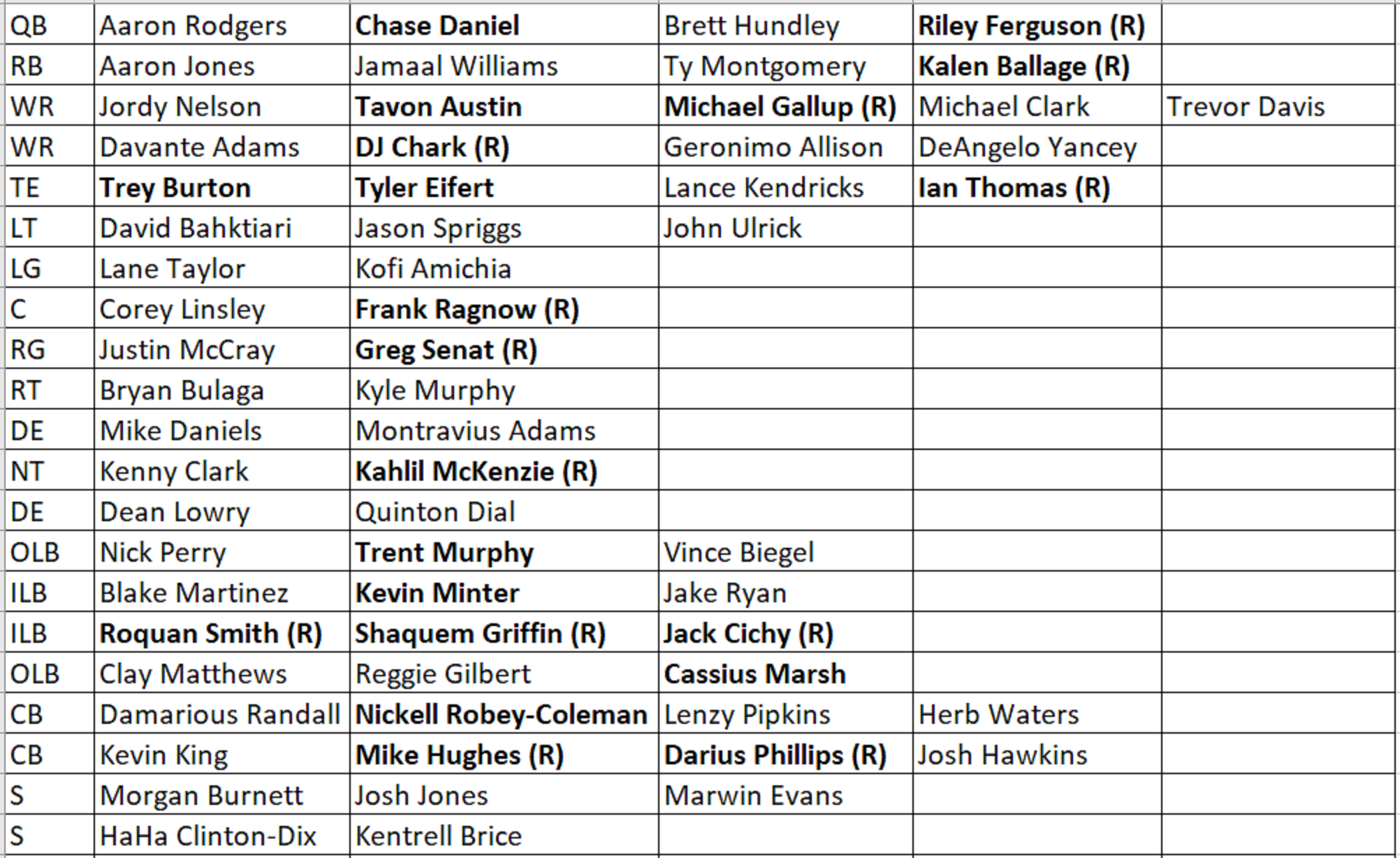 Having a limited amount of cap room isn’t ideal, but with the potential for Clay Matthews, Jordy Nelson, and Bryan Bulaga all to come off the books after the 2018 season the Packers can afford to overspend a little this offseason.