The Packers’ offensive line has been the most underrated position group over the past several years.  In spite of having a down year,  this group figures to be a strength next year.   This may seem off because offensive line is a true need this offseason, but it’s a group that consists of five starters, so statistically, it’s likely that offensive line will be a need each year.  David Bakhtiari, however, is arguably the best pass blocking left tackle in the NFL and provides the anchor to a line that is also strong at Center, and has a solid left guard. While they may yield a high number of sacks as a group each year, that is because Aaron Rodgers for all his greatness takes more sacks than others, especially when his receivers aren’t getting open right away, tends to hold the ball in hopes of making a play. And of course, Brett Hundley has very poor pocket awareness always trying to break the pocket as opposed to climbing it, running into sacks in the process.

The right side, both tackle and guard, provide the question marks for the line as well as depth.

Bryan Bulaga and right tackle is the biggest of those question marks. Week One of 2018 would be 10 months removed from Bulaga’s latest knee injury. This time he suffered a torn ACL in his right knee a few years after he tore his ACL in his left knee. Due to the short timeline and his injury concerns overall, at this point it to most observers it seems all but a foregone conclusion he will be released which would save $4.6 Million on this year’s cap and rid them of his $8.35 Million cap his in 2019.  However, it may behoove the Packers to keep him. From 2014-2016, Bulaga started 90% of the games and he recovered well after his last knee injury. The key consideration is that the cap savings from cutting him is modest and $6.5 per year (the amount the Packers would save on average by cutting him) is middle of the road for starters on veteran contracts. Of course, it wouldn’t be a surprise if Gutekunst cuts Bulaga, but if he does that would indicate he has a defined and certain plan for replacement. In that case, the likely scenario would be to bring in a lost or modest costing veteran, to go along with the tackle that is almost certainly going to be drafted fairly high (3rd round or thereabouts). That would be a “competitive roster” scenario that McCarthy stated he would like to see more of which could include others such as Jason Spriggs or Ulrick John.

Justin McCray appears to be the odds-on favorite to win the job at right guard. He showed much versatility in 2017, holding up reasonably well doing it. One can assume that he will only improve this year after having all of training camp to improve his skills at right guard if he is competing for that position. The other consideration however is that McCray is your ideal backup as he can play multiple positions. Jahari Evans, or more likely a veteran similar to Evans could also be signed and McCray would be first of the bench at either guard position and possibly be the fourth tackle. Overall, unlike the situation at tackle with Bulaga, guard is not a hard position to find a replacement.

The offensive line has been a strength in recent years. This year was marred by injuries, and all things considered, the unit held up rather nicely. Considering their strength at center and the left side, with a modest free agent signing or two, and some draft capital being expended on the offensive line, it figures in 2018 to a strength once again.  This will allow the Packers to use more significant capital whether it be via draft or free agency, on needs such as Edge, Cornerback, Wide Receiver and Tight End. 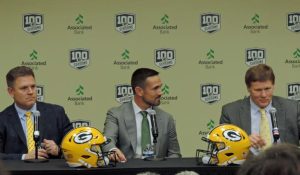