Small School Rising Stars : A Look at the Rising Talent in the 2018 NFL Draft Coming From the Small College Ranks. In this broadcast, Dave-Te’ discusses with Paul Crane that this year, the small college players are going to make “some noise” on draft day. While teams generally use the bulk of their draft picks to take known, major college talent, there are two dozen players from the Football Championship Subdivision and below that are deemed as draft-type players. 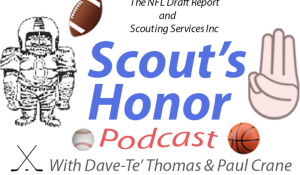