After months of looking at prospects, reading stories about the needs of the Packers, and doing my own simulations and rankings, we can finally see the end of this tunnel that we call the Path to the Draft. In just eight short days, the Packers will be on the Clock with pick 14 in the 2018 NFL Draft.

Now, we get to the main question: Who do they take? Is could be a pass rusher like Marcus Davenport. A defensive back like Minkah Fitzpatrick or Josh Jackson. Even an offensive lineman like Connor Williams or a receiver like Calvin Ridley. We won’t truly know until Roger Goodell announces it Thursday night. But I did my best at projecting who would be there, using the fun resource FanSpeak.

Using the Big Board of Bleacher Report’s Matt Miller, team needs voted on by users of FanSpeak, and the difficult algorithm, I ran a simulation of the Draft, taking control of the Packers. There were no trades, so each pick was used. And this is what who I would take if the board shook out like this.

The consensus best pure cornerback in the Draft, Ward falling would be a great turn of events for the Packers. There’s a chance that he might not make it out of the Top 10, but in this simulation five quarterbacks went in the Top 12 with Vita Vea going to another secondary-deficient team (Washington) at 13. That leaves Ward, who can cover any receiver with is speed and wingspan. He’d be a starter beginning on April 29, whether it’s on the perimeter of in the slot. He’s got All-Pro potential and could be as good as his former teammate Marshon Lattimore. And he can hit.

Another corner with great length despite his height, Hughes is a man coverage extraordinaire who is as competitive as it gets on the perimeter. As a rookie, he can learn from Tramon Williams while seeing action in dime. He is also a better ballhawk than Ward and has a knack for getting his hands on the football. He can also return kicks, showing a knack for finding a hole and shows great acceleration with the ball. Needs some fine-tuning on his technique and he was only a starter for one year, but his ceiling is very high.

The key for the receivers I’m taking is whether they are natural with their movements, and Pettis has that factor in spades. He is a natural for the slot and will learn a lot from Randall Cobb in 2018 with the potential to take over for him in 2019. Until then, he will immediately step in and be a Pro Bowl caliber punt returner. Pettis may never be the dominant receiver from this class, but he will be consistently solid for a long time while being one of the very best returners in the game.

Now, when it comes to potentially the best receiver in this class, one of the guys to keep an eye on is Gallup. Strong and as smooth as it gets, he dominated for Colorado State with great footwork over the middle. He brings the ability to run a slant like Davante Adams but the strength of an Anquan Boldin. While he needs refinements in his game, especially when it comes to consistency and focus-related drops. But the talent is there to be one of the most consistently excellent receivers in this class.

Finally, we get an Edge Rusher. And if you see a trend, there’s a definite leaning toward those teams in the West, especially the Pac-12 (this is the second of four guys from the conference.) I see no reason for that trend to change too much under Gutekunst with Ted Thompson still around and a ton of high praise for Western scout Sam Seale. As far as Mata’afa goes, he comes with the best motor this side of a 1970 Dodge Challenger. Relentless on the edge and with the quickness to get inside, Hercules is a perfect rotational piece for this pass rushing group.

Six picks in, still only three positions drafted. Two corners, two receiver, now two edge rushers. Whereas Mata’afa is a more well-rounded pass rusher, Adeniyi wins at the line with power and effort. Another guy with a good motor, Adeniyi is a worst a special teams stalwart. An outside linebacker group of Matthews, Perry, Biegel, Fackrell, Gilbert, Mata’afa, and Odeniyi is a lot more formidable group than we saw in 2017.

An athletic tackle who has plenty of nasty in his game, Gates is better as a pass blocker at this point than in the run game. He has a knack for reading pass rushers, showing the footwork to mirror them consistently in the Big Ten. However, he needs to get into the weight room before he sees any meaningful regular season snaps. His work against powerful opponents really hurt his stock. Some think he may move inside, but his frame is better to be a swing tackle.

One of the more impressive Combine performers in recent years, Ballage is a polarizing prospect. He has the natural ability to be a Day 2 pick, but he never showed consistency as a running back on the tape, with the exception of his record-setting eight touchdown game a couple years ago. One of the better receiving backs in this Draft, Ballage is a natural on the perimeter, catching the ball like a wideout while showing the agility and acceleration of a running back. Think Ty Montgomery with more speed and a leaner frame. Ballage also is a dynamite kick returner who could be a asset there as well. He just needs to find the right team to find his niche. He could be a bigger version of James White, or he could end up as a special teamer for his entire career. It’s all up to him.

Another risky pick like Ballage, but for different reasons. Ballage was durable and has a ton of tools, while Cichy is the opposite. A massive red flag on draft boards because of his injury history, Cichy was never the most athletic guy on the field, but he always stood out whenever you watched Wisconsin film. Another linebacker with a non-stop motor, Cichy is extremely instinctual in the mold of a Chris Borland, showing ability to get into the backfield consistently and making sure tackles. But those injuries…man, those injuries are a massive issue.

Another tackle who shows good footwork in pass protection but struggles with strength, Madison is a guy who is seemingly built to be a right tackle. He is a better technician than Gates, but doesn’t have as high a ceiling and isn’t as nasty. But he might be a better fit for a Joe Philbin offense where he can get in space and be the lead blocker on outside runs. Another guy who needs to spend some time in the weight room, he also could move to guard, where his mobility and ability to pull in space could be beneficial.

Small school prospects are hard to get a gauge on due to the level of competition, especially Division III prospects, but Joseph is a guy who, like Jeff Janis before him as a 7th rounder, has the tools to be a very good player in the NFL. He needs a lot of refinement, especially in his initial reactions on a route and in press coverage, but he is a great athlete who has a great story who is the type of flyer that the Packers have historically loved to take in the late hours of Day 3.

Undersized and inexperience as a linebacker, Burks has a lot to prove as he heads into the NFL, but as a prospect he is another guy that teams will look to take a flyer on, even if he just plays special teams. A former safety, he has moved from the back end of the defense to an outside linebacker spot and now the middle, where he fits as a coverage linebacker. Good in space and with great athleticism for a linebacker, he could be a Joe Thomas-type player for the Packers.

As you can see, there are a few glaring omissions, namely the lack of a tight end. I wish that weren’t so, but everytime I got on the clock, either one of the guys I had been targeting was either taken, or I badly wanted the other prospect that much more. That’s how it was when I took Hughes (Hayden Hurst was available), and Pettis (Mike Gesicki had went five spots earlier.)

I also ended doubling up for each of the first six picks with a focus on depth and special teams. Pettis and Ballage are instant upgrades to the return units, while Adeniyi, Cichy, Joseph, and Burks could step in Day 1 on the coverage units to make Ron Zook’s unit extremely formidable.

Finally, I went with guys who may not have tested the greatest (exception: Ballage), but their film doesn’t lie. Guys like Hughes and Gallup are two of the more polished players at their positions, and it shows up on tape. They can be impact players almost immedately.

All in all, if this were to be the Packers draft class, I would be ecstatic and would be in Ashwaubenon for the first open practice of camp. Let me know what you guys think, either in the comments or on twitter. 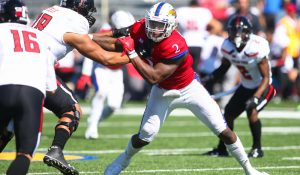 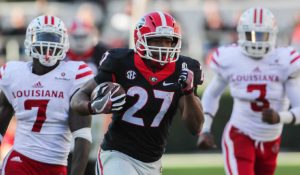 The NFL's New Year is just a single day away, and for the Packers that ...read more