In Wisconsin, Milwaukee Bucks star Giannis Antetokounmpo is known as “the freak” due to his incredible size, wingspan, and athleticism. If the Green Bay Packers had their own version of Antetokounmpo, it might be running back AJ Dillon. The rookie has yet to play his first NFL snap, but coaches and teammates are excited about the possibilities surrounding Dillon.

While 250 lbs. is pretty big for a running back, Lazard says Dillon carries his weight well from what he’s seen in workouts.

“He knows how to carry his weight, be able to shift and move,” said Lazard.

Green Bay’s receiver jokingly added that it’s been difficult to keep with up Dillon in the weight room despite Dillon being a rookie. According to Lazard, “he’s been great to work out with,” as having Dillon there to push him during the offseason has been beneficial.

The word explosive is only scratching the surface when it comes to describing the second-round pick. After looking back at Dillon’s combine measurements, one can’t help but be impressed. The 6-0, 250-pound product out of Boston College ran a 4.53, recorded a 41-inch vertical, a 10’11” broad jump, and 23 reps on the bench press.

Dillon easily had one of the best combines of all the running backs from this year’s class. That’s probably why the Packers liked him enough to take him early in the draft. It could also be his fit with Matt LaFleur’s offense.

During LaFleur’s lone season with the Tennessee Titans, he worked with Derrick Henry. Henry is now one of the most dominant runners in the league and arguably the most physically imposing back. LaFleur probably saw a little bit of Henry when watching Dillon.

Rarely, do teams spend a day one or even a day two pick on a running back, but Green Bay felt they couldn’t pass on Dillon. Aaron Jones and Jamaal Williams really can’t compare to Dillon’s physical and athletic profile, but Jones is still the presumed starter.

However, if Dillon continues to turn heads and proves to be the right fit for how LaFleur envisions his offense, he will more than likely be the running back of the future.

Packers Hope Dillon is the Answer

As he enters the final year of his rookie contract, running back Aaron Jones is ...read more

Don’t Expect the Packers to Stay Put in Round One 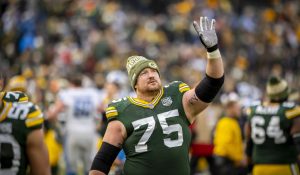 Bryan Bulaga Two Weeks Away From Hitting the Open Market

NFL free agency is two weeks away, and the only thing we are hearing from ...read more