Ever since he has arrived to coach the Green Bay Packers, Matt Lafleur has made it apparent he wants to use multiple running backs in his system. He is even known to use multiple backs on the same play. Now that Jamaal Williams has signed with the Lions, Green Bay could benefit from getting a third running back behind Aaron Jones and AJ Dillon.

Any easy way to do this would be the same route the Packers took to get Jones and Williams. Through the NFL Draft.

Now obviously the Packers are not in dire need of a running back, so using either of their first 2 picks on one seems foolish. Rounds 3-7 could find good talent as long as the timing is right. Again, running back is not the highest of priority so if a talented Cornerback or Wide Receiver is available, those are probably better picks. This is a talented draft for running backs though, so if there is a good talent available, picking one makes a lot of sense.

These three rookies could be great additions to the Packers backfield come draft day.

Gainwell has been talked about by many scouts as a back with a ton of potential, just not a lot of film. He was only a one year starter in college, but had a heavy workload in that lone season.

Where Gainwell excels is as a blocker and when he has the ball in space. As a secondary option for Green Bay, this could suit him very well. He will remain fresh enough to make explosive cuts, and is a much more speed oriented player than Jones or Dillon.

Look for Gainwell to be available somewhere in the 3rd or 4th round and if the time is right, Green Bay could go after him.

The second player on this list is Javian Hawkins out of Louisville. While undersized, he is very athletic and can do great things all over the field. In college he took reps at running back, receiver, and kick returner.

Similar to Gainwell, Javian Hawkins would bring a different style of game to the Packers backfield. He is elusive, and his stretch game is much unlike Dillon or Jones.

While his touch count was not large as a receiver, if you throw Hawkins out there in the slot, or as a second back to catch passes, he could be very successful in Green Bay

The final player I have on this list is CJ Marable out of Coastal Carolina.

The similar trend we see once again is the Marable is talented as a receiver and thrives in the open field. He was a touchdown machine in college, racking up 41 total touchdowns in just 3 seasons at Coastal Carolina.

Marable, like many running backs found in the middle of the draft, rely heavily on the system they get drafted into. He could be a great fit in this Packers offense as he wouldn’t be relied on for bulk carries. Marable would be asked to take the occasional carry, but would more so be the focus of screens, and option routes out of the backfield.

All three of these players have similar skill sets, and would likely benefit as the third back in the Packers system. If Green Bay wants to help Rodgers out in ways other than receiver, a talented swiss-army knife at running back could be that tool. 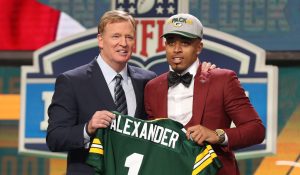