Quarterbacks make the NFL world go round. Playing the most important position in sports, they are at the crux of every franchise’s successes and failures and bear the weight of the spotlight 365 days a year. They are, in large part, why we tune in on Sundays and are also the reason fans have come to expect this offseason will be one of the most dramatic in some time. For the better part of the past seven months, anticipation has quietly built in the football world, underneath the surface of day-to-day news, about the unknown of what the next few weeks will present. At the top of looming news is, for a consecutive year, Aaron Rodgers’ future with the Green Bay Packers. He is the first domino in what will be an eventful spring for the franchise, regardless of his decision to return for another season or retire. Much speculation has swirled about the impact his decision will have on backup Jordan Love and what the young signal-caller would even command on the trade market, should the Packers decide to move on from him. Today we look at the price for Jordan Love.

The league looked relatively stable at quarterback not too long ago. A select group of young superstars, headlined by the likes of Patrick Mahomes and Josh Allen, spearheaded the future of the position while a few wily vets in the twilight of their careers continued to prove they were still the standard. Outside of the elite, numerous high draft picks from recent years — albeit still question marks — rounded out the rest of what was considered to be the average to below average starters. But even with some talents still needing to secure their spot at the table, the NFL was steady at its money-maker position.

After mulling over his future with the Packers, Rodgers returned for what was thought to be a “last dance” run at a Super Bowl before he and Green Bay’s other core players either left for new teams or retired in the 2022 offseason.

Over in Seattle, reported tension between Russell Wilson and the front-office boiled to the point the franchise quarterback was going to demand a trade. Those rumours subsided once the season began, but have picked back up since the offseason started.

Recently, Tom Brady, the seven-time Super Bowl champion, somewhat surprisingly announced he was stepping away from the game following the Buccaneers’ divisional-round exit from the playoffs. His return is possible but an official retirement seems imminent, leaving the Bucs without a quarterback.

More expectedly, Ben Roethlisberger, the sure-fire first-ballot Hall-of-Famer, confirmed his retirement from an 18-year career after the Steelers were bounced on wild card weekend.

Then there are several teams, including the Saints, Colts, Broncos, Commanders, and Panthers, who are expected to be in the quarterback market this spring. Let’s not forget the teams with — now bigger — question marks at the position, such as the Browns, Vikings, or Texans.

What seemed like a relatively stable position just a year ago has morphed into a potential changing of the guard for most franchises, all while teams prepare for what many believe is an underwhelming quarterback draft class.

Amid this chaos is Love, whose name has garnered more attention in the past couple of weeks as Rodgers’ decision looms.

The 23-year-old worked his way up the depth chart from a third-string, inactive-on-gamedays quarterback, as a rookie, to Rodgers’ bonafide backup in 2021. Whether the Packers felt forced to promote the 26th overall pick in 2020 due to the public scrutiny they faced after drafting him is anyone’s guess.

But in limited preseason action and his lone regular-season start versus the Kansas City Chiefs in Week 9, it was easy to tell he wasn’t ready to be a starting NFL quarterback.

Now with the possibility that he’s forced to be a backup again, do the Packers keep a first-round pick on the bench or sell him?

If Rodgers comes back, the biggest problem the team likely faces is Love’s value across the league.

This has been debated tirelessly across Twitter without a conclusion being drawn.

Working for the Packers

Working for the Packers are three things: the need across the league, the weak quarterback class, and his experience.

Let’s start with the need.

Even excluding the Vikings, who the Packers would not, under any circumstances, deal a quarterback to, that’s still a third of the league potentially open to a fresh face under-centre.

This might be the biggest determiner in Love’s value and the question comes down to this: where does Jordan Love, entering his third year in the NFL, rank among these prospects?

If the answer is at the top, the Packers’ phone could be ringing with a first-round pick on the table. But there’s also the chance he’s ranked low among these rookies, in which case, he might only be worth a mid-round pick.

How about his experience.

This is what I believe separates Love from the soon-to-be rookies and what boosts his value. Despite seeing limited action and not looking superb in those snaps, Love has still endured two NFL seasons. He still has two years of practice under his belt with real gameday snaps to his name.

He’s learned under Matt LaFleur, Nathanial Hackett, and Luke Getsy, and had arguably the most talented quarterback of all time as his mentor.

None of the prospects have that and it makes the evaluation process on Love slightly easier.

Working against the Packers

It’s no secret that it’s tough to move on from a franchise quarterback, especially when that quarterback is Aaron Rodgers, who, by the way, just took home his second-consecutive and fourth total MVP award.

But, it’s also easy to assume that if Love showed the same promise someone like Mahomes showed in limited action during his red-shirt rookie season, the Packers would be content moving forward with Love, especially after another disappointing playoff exit led by Rodgers.

The Packers threw any possible leverage they had out the window at the end of the season when they said they were adamant about wanting Rodgers back in 2022. They showed their cards, hoping it wouldn’t matter because Rodgers would return, but it could wind up costing them significant value on Love.

If Rodgers retires, Love is almost certainly off the table. LaFleur, Tom Clements, and Co. will work with the Utah product to maximize his potential as the future of the Packers.

If Rodgers comes back, Love will be on the market. But his value is surely tarnished by the team’s public desire for a 38-year-old.

What’s Loves price? I believe a team would give up a second-round pick for him. If the Packers are adamant about maximizing their return on that pick, I say they take it and run.

What do I think will happen? I think Love stays for at least one more year even if Rodgers is on the team.

Rodgers may be a year-to-year player at this point. Even if Love hasn’t proved he is the heir apparent yet, it doesn’t mean he won’t.

Stick with your pick and continue to develop a first-round quarterback. The last time you did that, it worked pretty well. 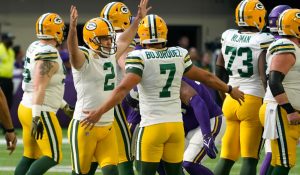