Last Thursday, as the Green Bay Packers front office began navigating the thorn bush that is this 2022 offseason, word began to spread on various social media platforms that former Green Bay Packers offensive coordinator Tom Clements would be returning to Green Bay to fill our vacancy at quarterback coach. Why would the Packers hire Clements? Rumor and conjecture swirled, as it tends to do this time of year, tying threads from Mr. Clements return to Aaron Rodgers possible conscious rejoining (that seems like a phrase Aaron would use) like Charlie Day trying to explain mail. And, while even Stevie Wonder could see the Packers front offices’ motivations in making this move, I tend to think, beyond the Rodgers aspect, this hire could pay dividends across the board at 1265 Lombardi Avenue this coming season.

If you have listened to any Aaron Rodgers post game press conference or extended media interview over the last several years, you have heard a lot about gratitude. And, a lot about books. And, even a little about bowel cleanses (yikes). But, you have also certainly heard many mentions of Tom Clements. Rodgers credits Clements with a lot of his development as a young quarterback, having served as Rodgers’ quarterback coach for the first 5 years of Aaron’s career. Aaron has a fawning respect for Clements. A gratitude, you could say. It is this relationship that Packers fan point to as a potential tea leaf in Rodgers decision to return. Gutekunst all but admitted that Rodgers had a hand in the hire at his press conference yesterday. However, I don’t believe that this hire was all a ploy at retaining Rodgers services. Gutekunst has been with the Packers in various forms since 1998. He is well aware of the type of coach, and man, he is getting with Tom Clements. And, Clements gives LaFleur something he hasn’t really had since he arrived in Green Bay–a voice of experience. A whole lot of green and gold-hued experience.

Tom Clements first tour of duty with the Packers came in 2006, when he was hired by Mike McCarthy to serve as his quarterback coach. After spending the 2006 season shaking off the considerable dust of the Mike Sherman Era, McCarthy and Clements shifted the Packers offense into hyperdrive in the 2007 campaign, coaxing Brett Favre to his highest QBR rating in 11 years, and somehow convincing the Ol’ Gunslinger to cut his interceptions down to just 15 (insert eye-roll emoji), all while brokering peace between the grizzled veteran Favre, and his prodigiously talented Golden Bear back-up who Green Bay had handpicked to terminate him. A thorny situation, yet a role perfectly suited for a quarterback whisperer like Clements.

A year after this landmark season, Brett Favre moved to New York and discovered the downside of sexting, and Green Bay was formally introduced to their next Hall Of Fame quarterback, Aaron Charles Rodgers. 2008, Rodgers first year as a starter, had it’s ups and downs, as any young quarterback is bound to experience. The Packers would miss the playoffs in 2008, before embarking on 8 straight years of postseason appearances. Clements would be on the coaching staff for all 8 of those seasons, eventually transitioning from quarterback coach to offensive coordinator, and then to associate head coach. Clements would temporarily leave football after the 2016 season. McCarthy would fail to reach the playoffs over the next two years without his stalwart offensive consiglieri, and would be let go in December of 2018 to the ecstatic delight of Packers fans worldwide. Clements would return to football a year later as a part of Kliff Kingsbury’s staff in Arizona, helping guide another extremely talented young quarterback, Kyler Murray, before stepping away again in 2021.

Now, Clements is back in Wisconsin, and back to nurture yet another young talent. No, I am not talking about Jordan Love. While I am certain Tom Clements will be a valuable mentor to the former first round pick, I actually think he may have an even more significant role assisting Adam Stenavich in his first season as Green Bay’s offensive coordinator. We all know Steno–We all love Steno. Stenavich’s work with the offensive line has been nothing short of phenomenal. And, we all know LaFleur is Green Bay’s de facto game day offensive coordinator, spending his Sunday’s poring over his playsheet with the same love and care as I do when perusing a Cheesecake Factory menu. Still, this is a young crew that Matt LaFleur has chosen to surround himself with. A crew that is pretty light on actual coordinating experience Stenavich got his first taste of coordinating last season, when he served as the running game coordinator for Nathaniel Hackett. It can’t hurt to have a voice as seasoned and even-keeled as Clements for Stenavich to learn from. Just like it can’t hurt to have three decades of coaching experience in the building to help Jason Vrable, Green Bay’s new passing game coordinator, acclimate to his new post. After all, one thorn of experience is worth a whole wilderness of warning. 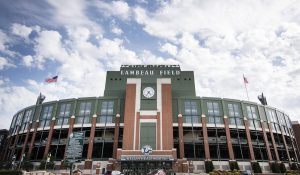