Last week we wrapped up our off season-review of the Green Bay Packers offensive side of the football.

This week we’re going to take a look at how the Packers defensive line group stacks up after the 2021 season.

Kenny Clark is the tone setter at the first level of the defense and a bona fide game changer.

Clark bounced back from an injury-marred 2020 campaign and looked like his old, bulldozing self with 4.0 sacks, 13 QB hits and 6 TFLs. His efforts were recognized with his second Pro Bowl nod.

He played almost 73% of all defensive snaps with only De’Vondre Campbell seeing the field more amongst the front 7.

I’ve long thought the key for Clark (and maybe the same can be said about all pass rushers) was keeping him fresh for the most critical points of the game. I feel like the Packers have done a better job of not running Clark into the ground, but problems arise when you don’t have quality depth to spell your stars.

I’d love to see Brian Gutekunst mine the veteran scrap heap after the first few waves of free agency to help with the drop-off when Kenny Clark is out of the game.

One of the names that piqued my interest was Linval Joseph who has been a consistent run-stuffer throughout his career and offered a little pass-rush upside, and at age 33 will not command much more than the vet minimum in pursuit of a Super Bowl ring.

Gerald McCoy is another player that could fit the mold of low-risk/high-reward. McCoy has had a hall of fame-caliber career but is now 34 years old and coming off back-to-back significant injuries.

Much like Brian Gutekunst’s signing of Jaylon Smith, you could bring McCoy in for a look with perhaps no guaranteed money and if he’s got something left in the tank, great, and if not you can part ways.

Dean Lowry had an outstanding 2021 season.

I’m not sure I ever thought I’d write those words about the former Northwestern d-lineman.

Lowry has been a steady and durable contributor throughout his Packers tenure. The king of doing the things that don’t show up in the box score.

But 2021 was different. Lowry seemed to do some creating on his own instead of just being the beneficiary of the players around him.

I’m not saying he’s going to get my hall of fame vote, but Dean Lowry is an asset to the Packers defense.

The biggest problem is that Lowry enters the 2022 season with a cap hit of more than $8 million.

Further complicating matters Lowry was restructured once already in May of 2021, pushing out $1.86 million in void year charges.

The Packers can save $2.2 million if they cut Lowry.

I don’t believe that you’re able to replace his production at that price, and he’s still squarely in his prime at age 27 with the *potential* to take another step forward in his development.

It’s a shame. Every so often, whether it’s on the Packers roster or a former personal draft crush there’s a player that is oozing with physical tools that you are just waiting to get the opportunity to breakout and then they fall flat.

In Keke’s case, the talent translated to the field but there was something else going on in the background. The Packers surprisingly elected to cut Keke on January 19th after an apparent disagreement on the handling of his stint on the COVID-19 list and a concussion.

The handling of personnel is not always a linear process and sometimes you have to part ways with players that are assets to your team.

Unfortunately for Packers fans, we will not being see Keke make good on his physical talents in Green Bay and further exacerbates the need for defensive line depth.

Lancaster exists to clog running lanes, eat up blockers and generally provide support for the other players along the line.

He’s not a pass rusher, producing only 1.5 sacks over the course of the last four seasons.

Lancaster has also played a fair mount on the kick protection units on Special Teams. That alone is cause for job security concern.

At 27 years old and an unrestricted free agent, I believe that the Packers will look to replace Tyler Lancaster’s services with a player who is younger and potentially offers more upside.

I could certainly see TJ Slaton absorbing the majority of Lancaster’s 319 snaps.

Tedarrell Slaton was selected by the Packers in the fifth round out of the University of Florida in the 2021 NFL draft.

Slaton has the prototypical nose tackle build at 6-4, 330 with great length and ability to push the pocket.

He also showed some pass-rush potential, tallying 3.5 sacks in his last 2 seasons at Florida.

The book on TJ coming out was a player that had all the physical traits (80th percentile RAS grade), but perhaps lacked the consistent motivation to take his game to the next level.

Slaton played in all 17 games for the Packers with 1 sack and a couple of QB hurries. It did seem like he was making positive contributions when he was on the field.

With a year of learning NFL tendencies and adding strength in the weight room under his belt, you have to think the Packers can count on Slaton for a larger role in 2022.

It’s a little too early to say what Slaton’s ceiling is, but at minimum I think he can adequately fill the role vacated by Tyler Lancaster.

The Packers are not devoid of talent along the d-line, but quality depth is perilously thin. They are also getting older (not old, yet) at the position with their top two performers in Clark & Lowry turning 27 & 28 respectively.

Although Brian Gutekunst used draft assets to bolster the defensive line last year, it’s a bit of leap to say that Slaton and Heflin are ready for prime time.

I wouldn’t rule out BG spending another mid-round draft pick on an IDL or DE, but I could also see the Packers dipping a toe in the free agent pool (strange as that sounds, given their current cap overage) once the dust has settled. 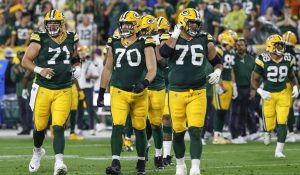