The Green Bay Packers are the only remaining NFL team that has not played a regular season game abroad. Until now, the organization has declined all offers to relinquish a home game in Green Bay for a game in foreign cities such as Mexico City and London. However, after the adoption of the 17 game regular season schedule last season, the NFL has mandated that each team travel overseas for a regular season game before 2029. Accordingly, the 2022 season will feature a Packers game in London, as Green Bay will cede one of their nine home games in the upcoming season.

This announcement has received a mixed reception from those in the Packers community. So today, I’d like to explore whether fans ought to be excited about the upcoming tradeoff of Lambeau Field in Green Bay for Tottenham Hotspur Stadium in London.

According to Richard Ryman of the Green Bay Press-Gazette, Packer’s home games bring in around $15 million for the local Green Bay economy each season. To give some perspective on the gravity of this number, we can look to the reporting of Mark Sheer of the Investigative Post, who found that a new stadium in Buffalo would only provide a local economic boost comparable to the opening of a Target store. With this in mind, one can speculate that Packers home games are far more economically valuable to their community than home games for other NFL franchises.

This should come as no surprise to anyone who has been to a game at Lambeau. These are city-wide (even state-wide) events wherein a relatively small community finds meaningful connection. What I mean by this, is that in a city of just over 100,000 people like Green Bay, it is much easier to foster a robust–and lucrative–base of fans and community members who will literally buy into the spectacle of an NFL game than it might be to foster the same type of response in a city of over 3 million people, like Los Angeles.

Add to this the culture that has been built around the Packers–the only NFL team without centralized ownership–and you have a winning business model. Therefore, economically, it only makes sense that the Packers organization would resist parting with one of their home games in favor of a trip abroad.

Nonetheless, because this trip is mandated by the league, we can do away with arguments that the Packers should have resisted further. The question for fans, then, is whether the upcoming London game should be anticipated with positivity or pessimism.

Economically speaking, the loss of revenue that will surely come from giving up a home game in Green Bay for a “home” game in London, seems like good reason to be pessimistic. However, when one considers the fact that the Packer’s would’ve had an extra home game in the upcoming season (9 instead of 8) because of the recent 17 game regular season expansion, the perceived economic blow becomes easier to stomach. When conceived in this manner, it can be expected that Packer’s football will bring in about the same local revenue that could be expected in previous 16 game seasons.

What’s more, there may be other compelling reasons why a Packer’s game abroad is something to be excited about.

There are few fanbases of any sport that travel as well as fans of the Green Bay Packers. This is why teams that often play international games have not given up their home games for games abroad when their opponent is the Packers. I can also provide some anecdotal evidence of the reach of Packer fandom, as even in Florida, where fandom for the Buccaneers has seen a resurgence, there are green and gold G’s abound in much higher density than any other non-local NFL team.

Why do Packer fans travel so well and exist in so many corners of the country? The answer is likely multi-faceted with things like the Packer’s history, and the aforementioned decentralized ownership being contributing factors. With these reasons and others notwithstanding, we can conclude that something about the culture around this team is different. The Packer’s are one of the smallest-market, but most successful franchises in the NFL. In many ways this represents the romanticism of the American experiment–the underdog story that we all can’t help but admire.

For example, what comes to mind when people think about “America’s team”, the Dallas Cowboys? A rich man in a suit building giant television screens instead of championships.

What comes to mind when people think about the Green Bay Packers? Bart Starr, Vince Lombardi, Brett Favre, Reggie White, and seas of cheeseheads–in other words players and coaches working hard to have perennial success with a community behind them. In many ways, the Green Bay Packers are a grass-roots success story to which many American’s can easily relate.

And who’s to say that this same story is not relatable for others in foreign countries as well?

Rich Men and their Spaceships

All of this leads me to my final point. That is, if the NFL proves fiscally viable in other countries, then, as a business, the NFL will expand into the global marketplace. There is no point in fighting this, just as there is no point in moaning about the seemingly unnecessary actions of other rich men who have run out of ways to spend their money on Earth and have thus built rockets to continue counting their Benjamins in space.

Roger Goodell and those in NFL ownership positions are rich men who are, first and foremost, attempting to run a successful business. And no fan should be disillusioned about the actual capitalistic incentives that underscore every decision the league makes or about how little the desires of fans are actually accounted for when dollar signs are stacked against them.

With all that said, if a global NFL expansion is imminent, then Packer fans should be excited about the opportunity to bring their team (and I mean their team) to potential fans around the globe. My expectation, given all that I’ve said thus far, is that the story of the Packers will resonate with many other grass-root, blue collar, community-based individuals in other countries in the same ways that it does with many Americans.

With the economic blow of playing in London being easier to stomach this season than it would have been in prior seasons, now seems like a great time to carry the G to other parts of the globe–especially if an NFL expansion is on the horizon. After all, because of the Packers culture, the Packer’s community is built to be inherently welcoming. So if a game must be played abroad this season, then why not welcome the opportunity to bring more people into Titletown?

Having pessimism and complaining about the upcoming game in London, to me, amounts to nothing more than a fools errand. And it is my hope that other fans will join in my excitement about waking up extra early to watch the Packers play their first regular season game overseas in 2022. 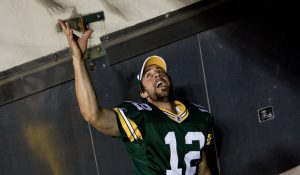 The Last Dance for the Packers...Before the Next One

As everyone in Packer-land is now aware, last season’s “Last Dance” for Aaron Rodgers and ...read more