Last week the sports world found out that 49ers wide receiver/running back Deebo Samuel wants out of San Francisco. And just like every other pass catcher in the last 3 years, the Green Bay Packers were immediately listed as a top landing spot for Deebo. Unlike the last 3 years however, there is no longer a clear WR1 on our team. But, while the Packers do need more receivers, we do NOT need Deebo.

The top three teams listed to be interested in Deebo Samuel are the Detroit Lions, the New York Jets, and the Green Bay Packers. All three teams each have a lot of draft capital to play around with, but that is where the similarities stop.

As the 49ers look to trade Deebo, there is no world in which they ask the Packers for the same value trade as the Lions or Jets. The Packers would have to win this bidding war by a landslide to convince the 49ers to trade their top offensive player to a conference rival. At a minimum, I expect a package similar to what the Packers received for Davante, which is too much for the Packers to give up. Not to mention the contract that Deebo is expecting would put the team in an even more precarious cap position.

He is not Davante Adams

On March 17th Packers fans were left in shock upon finding out Davante Adams was being traded to the Las Vegas Raiders for a 1st and 2nd round pick. If we can assume (hope) that Sammy Watkins replaces most of the productivity of Marquez Valdes-Scantling, if not the same role, then we are left asking how do we make up for Adams’ 123 receptions for 1,553 yards and 123 touchdowns?

Deebo Samuel’s best play last year came from his role as a gadget player, but unfortunately that is also what he is unhappy with in San Francisco. Deebo wants to be a true receiver. This is completely understandable as a business decision, but it greatly lessens his value on the football field, especially in Matt Lafleur’s offense.

Deebo would be a great addition, but he can’t replace Davante on his own, which is basically what his price would be asking for. Deebo isn’t the answer to replace Adams. No single player is.

If you have had the pleasure of reading the CHTV Draft guide, you will know it is chock-full of phenomenal insights. But if you are impatient like me, you will have skipped all that the first time you opened it and went straight to the wide receiver analysis.

As you may have heard, it has been…well, a few years since the Packers took a wide receiver in the first round (20 to be exact). But this is the year that changes. This is the year not because there is a Julio Jones/Jamaar Chase level player, but because of the depth of this draft class. The top 10-15 wide receivers all look like they will be ready to contribute Day 1 with many showing signs of being top tier players. With the Packers having 4 picks in the top 60, they are in a prime position to do whatever it is they have up their sleeve.

My dream? Chris Olave and George Pickens. Will I happily settle for Treylon Burks and Christian Watkins? Absolutely.

No one knows who they will be, but the Packers are walking away with 2 receivers drafted in the top 100, along with either a developmental EDGE, a top tier Tackle, or an immediate upgrade to Henry Black at Safety. The Packers give up so much opportunity to round out their roster if we trade for Deebo. He is not what will get us over the hump; these role players are.

I know it is tempting to grab a proven wide receiver in this moment of weakness. It would be beyond exciting to finally have another big-name receiver on the Packers. But that is not what gets us over the hump. You don’t replace Adams, you work together to fill the void.

Cobb, Lazard, and Watkins are experienced receivers ready to make third down catches. Amari Rodgers looks dangerous with the ball in his hands and has every chance to make a big stride. Add two high value receivers in the draft to develop and create some big play opportunities and the receiver room is suddenly bursting with talent. Next you shore up with OL and defense and you are looking at the most talented, well-rounded team Aaron Rodgers has ever had.

Who trades for Deebo Samuel this offseason? – Powered By PickUp 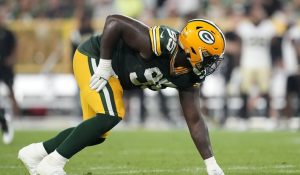 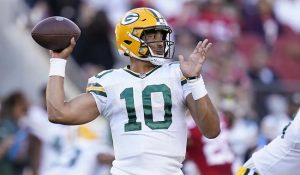