After their first matchup on November 6th, no one would have expected that these two teams would be vying for a playoff spot in the regular season finale. The Packers dropped their 5th straight game to fall to 3-6; the Lions climbed to 2-6. Now they’re two of the hottest teams in the league, and both enter Sunday needing a win to secure a playoff berth. The Lions will know their fate before kickoff – as a Seahawks win against the Rams will eliminate Detroit. Regardless of that, the Packers can’t overlook this Lions team as Dan Campbell has helped changed the culture for the typically hapless franchise.

The playoffs essentially started for Green Bay a month ago. So it’s silly to suggest that they wouldn’t get up for this game no matter the opponent. And historically speaking, the Lions haven’t been a major threat to the Packers. Aaron Rodgers has beaten them 18 times throughout his career, and revealed his feelings about Detroit after the loss saying “we can’t lose a game like that against that team.”

But these are very clearly not the same old Lions. And that win against Green Bay has been the catalyst for their resurgence. Since that Week 9 win, the Lions have been one of top offenses in the league. They rank 3rd in passing DVOA, and 1st in passing EPA in that stretch. A lot of that comes from the play of QB Jared Goff. He has been one of the most efficient passers in the league all season, but especially over the last 2 months. In fact, Goff hasn’t thrown a single INT since the Packers game in Week 9 (15 TD).

Turnovers have come in bunches for the Packers defense, with 12 takeaways in their current four game winning streak. But that might be hard to replicate this week against the Lions offense. And they have also gotten a boost from rookie Jameson Williams, who’s role has grown each week since his return from ACL injury. Williams gives their offense a threat akin to Christian Watson – a big play threat every time he touches the ball.

Offensively for the Packers, it’s as simple as finding success in the red zone. It’s been an area of concern all season, but no game highlighted this more than Week 9. The Packers had no trouble moving the ball, finishing with just shy of 400 total yards. But they had four possessions go inside of the Lions 20, and came away with 3 total points. Add a third Rodgers interception from Detroit’s 22 yard line, and it was one of the worst performances of his career.

The Packers offense has finally started to get healthy, and the results are coming on the field. That should be enough against a leaky Lions defense. But Matt LaFleur will have to figure out how to solve their red zone woes, and that includes better execution from his QB. 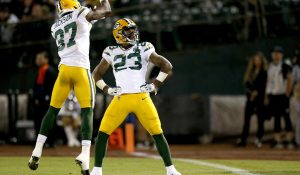 When only two weeks left in the regular season, many would have expected the Packers ...read more