Yet another preseason game and yet another starting wide receiver felled with an injury. Who didn’t gasp and get an instant ulcer when Randall Cobb headed to the locker room last Saturday night? With the way he went down, it could’ve easily been a clavicle fracture much like Aaron Rodgers’ two years ago. It was bad enough to stomach the thought of no Jordy Nelson for the entire season, but another 6-8 weeks without Cobb was a terrifying prospect.

Fortunately nothing is fractured, and “sources” tell NFL Insiders that there is a very good chance Cobb will be there for the season opener against the Chicago Bears. I’m not going to even link it because the media outlets are just listing an anonymous source somewhere in the bowels of the Packers organization.  By the second half we already knew that he hasn’t broken anything and that evening Mike McCarthy explained that Cobb had sustained a “shoulder sprain.”

That isn’t bad, right? It sounds benign like an ankle sprain. Walk it off, tape it up, and whatnot.

But what exactly is a shoulder sprain?

You may recognize it by its more ominous name, a shoulder separation.

No, that doesn’t mean anything is not where it’s supposed to be. He didn’t dislocate his arm from his shoulder like Aaron Rodgers may have done in 2008. But it does mean he injured the ligaments in his shoulder.

When we think of the shoulder joint, we immediately imagine the ball and socket joint that is formed between the shoulder blade and the head of the humerus. But there are other connections holding the shoulder together that don’t comprise the mobile part of the joint. The shoulder is where the shoulder blade and the clavicle also come together, and while that is not a mobile joint, per se, it is still a joint that can be injured. In fact there are two connections that are formed with ligaments that bind these two bones together. And in the case of Randall Cobb, that is the injured joint in question. 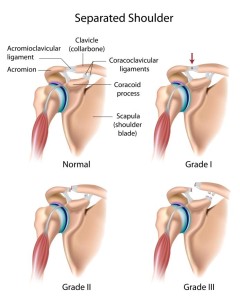 The collar bone, or clavicle, attaches at two sites on the scapula (the shoulder blade)–at the acromion, a finger-like projection seated just above the ball and socket joint of the shoulder as well as another protrusion called the coracoid as illustrated in the graphic to the left. They anchor the collar bone to the shoulder. When these ligaments are disrupted, it is considered a shoulder separation.

The ligaments are most commonly injured by a direct fall on the shoulder. With all the tackles that occur in football, it’s not that shocking that this is a common injury of those being tackled–receivers, running backs and even quarterbacks. Brett Favre has had this type of injury a couple of times during his career.

These ligaments are injured with the scapula is pulled downward with the weight of arm when strikes the ground and those forces pull against the connection between it and the collar bone.

As a reminder, any sprain is an injury to a ligament, not a muscle. So yes, Cobb sprained this joint. And with any sprain, there are gradations to classify the injury. As always, the lower the grade, the less severe the injury. In a Grade I injury, there is straining and minimal tearing to the acromioclavicular (AC) ligament. It hurts, no question, but structurally, the joint is intact. It’s the equivalent to the minor ankle sprain you nurse along but is usually healed in a week or two.

Finally a Grade III is a complete tear at both ligamental groups. It is the most severe form of a shoulder separation. While both Grade I and II injuries are often treated conservatively with rest and rehabilitation, the jury is still out among orthopedic experts with the Grade III tear. Some advocate conservative rehab while others are in favor of surgical correction.

While physical exam and old fashioned X-rays can diagnosed a separation (the gap of the AC joint is often wider on the injured side when compared to the other shoulder), the MRI Cobb had this past Monday clearly outlined the extent of the injury.

It was definitely reassuring when Cobb returned to the sideline the second half of the game. He wasn’t in a sling (well, technically neither was Aaron Rodgers when he fractured his clavicle. If you watch the film of him returning to the sideline, he is subtly using the pocket of his hoodie as a makeshift sling on the sly.)

The Packers describe Randall Cobb’s injury as minor. In fact, I don’t think they’ve even used the word separation to describe it. That, coupled with the leaks coming out of the organization that he’s planning on playing Week 1, leads me to take an educated guess that he likely has a Grade I separation. Treatment for that is rest, ice, pain killers like ibuprofen and physical therapy. He may be wearing a sling behind the scenes for comfort reasons only. Like a mild ankle sprain, pain will be the deciding factor when he is ready to play again. That said, a Week 1 return is truly not out of the question.

Don’t be surprised if Cobb doesn’t practice until a few days prior to the Chicago game. That doesn’t mean he isn’t exercising the shoulder and receiving treatment, but don’t expect him to be in pads until it is time to return fully to the game.

The Packers dodged a doozy with Randall Cobb last Saturday. But if you read between the lines, the team has ever intention of calling on the veteran receiver once the season begins.

This article in no way is a substitute for medical advice, a diagnosis, or visit from your own medical provider. It is for entertainment purposes only. Caveat emptor. Do not eat yellow snow. These are not the droids you are looking for. To hear a quacking duck, please press 3.