With just one final game to close the 2017-18 NFL Season, it’s time to turn our attention to the NFL Draft. The Packers sit at 14th overall, their highest position since 2009 when they took BJ Raji with the ninth pick. That leave open the opportunity to take a game-changing player, preferably on defense.

But there are many needs on both sides of the ball. That’s why I am doing this series. Each Tuesday, I’ll give you a different prospect at every position that could conceivably go to the Packers and I’ll also end with a Mock Draft using FanSpeak’s simulator. So let’s get to it.

Falk is a prototypical pocket QB. He has a strong arm and is known for his accuracy in a pass-happy offense at Washington State. He needs some work in the weight room and isn’t the most mobile, but he compares favorably to Kirk Cousins. He could be a great value as a backup in Round 4 or 5. Unlike when Brett Hundley was drafted, Falk is a much more polished passer coming out of the Pac-12 and doesn’t have nearly the development curve.

Jackson won’t wow you with his measurables or his eventual combine numbers, but the guy was productive for four years in a brutal Big Ten. He faced top defenses every year and was as consistent as the sun rising. The Packers don’t have a massive need for a running back but Jackson could be someone to look at on Day 3

Gallup is one of my favorite receivers in this class. Coming from a school that isn’t known for NFL talent, Gallup was extremely productive for the Rams, especially in 2016 when he had 14 TD. Matt Miller of Bleacher Report agrees as well with Gallup listed as his biggest riser among the receiver class. If he is there in Round 3 or even 4, I sprint to the podium for him.

Goedert is seen by many as the top tight end in this year’s class and could go in the first round. He is very athletic for his size and has the speed to create separation. He reminds me a lot of a combination of Anthony Fasano and Tyler Eifert with his game and he can be a Day 1 starter for a lot of teams. I wouldn’t take him in Round 1, but if he’s there in Round 2, I wouldn’t be opposed to his selection.

Iowa offensive linemen have worked for the Packers in the past (see: Bulaga, Bryan), and Boettger is talented enough to continue the trend. The biggest knock is an achilles injury that cut his 2017 short. The starter at right tackle for Kirk Ferentz, Boettger is a mauler who opened up holes in the running game with aplomb.

Wynn is a very good run blocker on the interior with the versatility to play some center as well. He could come into the NFL and provide needed depth at both spots and compete for a starting spot right away.

Vea could fluctuate anywhere between the Top 15 and late in Round 2 depending on how teams see him. A massive specimen, Vea has good burst and leverage, making him an ideal nose tackle in a 3-4 or an 4-3 defensive tackle. He could be Danny Shelton of the Browns or Haloti Ngata.

Landry is considered one of the top edge rushers in the Draft despite dealing with injuries in 2017. He was the best pass rusher in the NCAA in 2016, leading the country in sacks as a junior. He decided to come back to improve his craft as a senior and was off to a good start before his injuries. There is a lot of Derek Barnett in him as a pro. He is a safe pick as an edge rusher who will be able to step in and contribute right away.

Vander Esch is one of the more athletic inside linebackers in this class. Expected to perform extremely well at the Combine, he was a sideline to sideline tackling machine for the Broncos in 2017. He is a bit undersized at the moment, but he could be a Su’a Cravens type player in the NFL.

Projecting Hill is difficult because he was suspended by the Longhorns at the end of the season for violating team rules. But when he was on the field, he was a playmaker, scoring TDs in the first three games of the season. With prototypical size for the modern corner, Hill is a good fit as a press-man boundary corner at the next level.

Jamerson converted from cornerback in 2017, Jamerson showed his ballhawking skills and football IQ for Jim Leonhard’s top ranked squad. He also provides value as a kick returner and is known for his high character and motor. Could be a special teams demon at worst and a late round flyer who can be a starter with time. 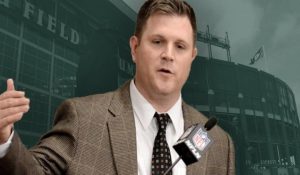 The final episode of War Room is here! The guys assume the roles of the Green ...read more

The guys are back and ready to rock! Join hosts Fred Thurston & Blaine Hornes ...read more

4 thoughts on “Packers Draft Prospects to Keep an Eye On”