Tramon Williams: The Packers are not Super Bowl XLV champions without the play that Williams provided that postseason. His interception in Philadelphia sealed their Wild Card victory. His interceptions in Atlanta blew the game wide open. His breakup on Pittsburgh’s last shot in the Super Bowl sealed their 4th Lombardi Trophy. If he isn’t inducted into the Packers Hall of Fame, then heads need to roll.

Morgan Burnett: A veteran free agent  seeking his third contract is almost never re-signed in Green Bay. While he has battled his share of injuries in his career, Burnett has been nothing but a steady, solid professional. His body of work warrants playing time on virtually any roster in the league.

Nick Collins: He is the most underrated Packer of the 21st century. Each year, he improved significantly, coming to an apex during the 2010 Super Bowl run. His pick six in Super Bowl XLV was the biggest play in the first half of that game. He was well on his way to becoming the next LeRoy Butler, perhaps even better. His spinal injury at the mercy of a running back’s ass in 2011 is one of the most unfortunate plays, to put it mildly, in NFL history.

Casey Hayward: Letting this man walk after 2015 has proven to be a grave mistake. He is widely mentioned in league circles as a top 5 CB. The lack of productivity from what he had to offer is a giant example of the failures of the Dom Capers regime in the last seven seasons….Seven seasons. Think about that. You’re welcome, Aaron Rodgers.

And finally, there’s the dude who should be brought back into town: Samuel George Shields III.

Sam Shields is the best undrafted free agent of the 2010s. He had the best rookie year (in 2010) of any undrafted free agent in almost forever. A former wide receiver at the University of Miami (the U), he instantly contributed to Green Bay on defense and special teams. In a rookie campaign full of pleasant surprises, he sealed the NFC Championship with a dagger interception to cement his place in team history.

In a recent interview with Michael Cohen at the Milwaukee Journal Sentinel, Shields voice his desire to return to the NFL. In his interview, he detailed the rehab he has taken to basically make his brain healthy again. It’s new territory to hear about players rehabbing their way back from concussions with mental exercises through university programs, but Shields has gone through with it. He no longer experiences the headaches that plagued him since his fifth documented concussion at Jacksonville in September 2016.

Sam Shields feels normal again, physically and mentally. In a widely shared social media post, his close friend Morgan Burnett mentioned the start of his attempted comeback to the league.

Why should the Packers consider bringing Sam Shields back? There are several reasons

Oh, and they’re also shorthanded at the cornerback position anyway. Damarious Randall rebounded admirably after a rough start to 2017. He is proving to be a legitimate corner. Kevin King has a high ceiling and should continue to grow as long as he’s healthy. Other than that, the cornerback position is a giant question mark in Green Bay. The Davon House reunion was largely unsuccessful. Why not bring back one of the more recent pillars of the secondary through a low risk transaction?

It’s your call, Gutey (that would be new GM Brian Gutekunst. We call him “Gutey”) 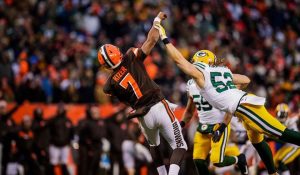 Packers Need to Hold on to Clay Matthews in 2018

Murmurs of the Packers restructuring Clay Matthews' contract, or even cutting him, were taking place ...read more

5 thoughts on “The Case for Bringing Back Sam Shields”