I’m going to post a bi-weekly draft piece on Football Fridays here on PackersTalk.com.  Mock drafts using Fanspeak, my custom Packers Big Board, scouting reports, links to film breakdown, you never know what you might get.  Stay tuned to Packers Football Friday all the way until draft weekend to find out. 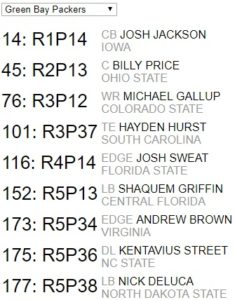 I usually jump around when it comes to the big boards but Matt Miller had just uploaded one to FanSpeak.  Again I used user-voted team needs and the “difficult” setting.  I’m not sure what the differences are but time and again these mocks come out “too good to be true” and you catch a bunch of heat for it.

I’ll be honest, Josh Jackson’s going to end up as the Packers pick in a lot of the mocks that I do.  Jackson is #3 on my personal Packers big board and I don’t see him falling any time soon.  He’d have to run very poorly in Indy for me to have a level of concern about his potential as a pro. He boasted the #2 QB rating against of any cornerback in college football a year ago.  Add that to the fact that Iowa lists him at 6’1″ he’s a CB1 dreamboat.

Then all of a sudden this draft got really offense-heavy.  Rodgers is likely to sign a long term extension soon and the Packers re-load his side of the ball with weaponry.

Billy Price is an interior offensive line candidate that has a chance to be special.  He would slide in immediately at right guard and also (immediately) become the team’s backup center.  Think of him as a version of JC Tretter that’s stronger but can’t play tackle.  I’ve made my thoughts about Michael Gallup quite known.  Hayden Hurst is a guy that keeps coming up.  South Carolina actually let him run the ball a little.  He’s a good athlete that struggled with some QB play.

The rest of the draft is designed to give Pettine and Zook some bodies to work with.  Interchangeable pieces.  Sweat and Brown can move around a little bit.  Shaquem Griffin can be utilized in a number of ways.  Nick DeLuca is an instant upgrade over Joe Thomas at ILB.  Kentavius Street is another big body for the defensive line.

Matt Miller (Bleacher Report)– Davenport, DJ Moore, WR Maryland and Hurst- well we agree on Hurst.  To be very honest I have to watch more DJ Moore to really form an opinion.

Chris Trapasso (CBS Sports)- Will Hernandez, G UTEP – no thanks.  No positional versatility, not a game changing guard.  Give me a mid round pick at guard if it isn’t Price or Nelson.

RJ White (CBS Sports)- Harold Landry, EDGE Boston College- this I can get behind.  People complain about Landry because of a poor game against Notre Dame and playing on a bad team in a weaker conference, but Landry’s 2016 tape is about as good as you’ll find from an EDGE in this class.  He’s a skilled player and Mike Pettine could only be so lucky.

One thought on “Packers Mock Draft 2.0 with Roundup”