It was May 28, 2000.  Roger Clemens vs Pedro Martinez.  Two of the greatest pitchers of the modern era, both squarely in their prime and on teams that were archrivals.   It was a pitching duel of all pitching duels.  Through eight innings, there were zero runs with seven total hits and 21 total strikeouts.  The top of the 8th inning started innocently enough when Clemens got the first two batters to ground out and then the next batter reached first base on a single.  Up came Trot Nixon, who was serviceable though not scary hitter.  The count went to 2-1 when Clemens threw a fastball on the outside corner high in the zone.  The result?  A no-doubt home run to right center field by Nixon.  It was a shocking site.  After 8 2/3 innings of domination, an average player went yard for what ended up being the only runs of the game as Martinez was able to get the shutout.

Fast forward 18 years and one of the greatest quarterbacks of all time threw for over 500 yards only to lose after fumbling on his team’s penultimate drive.  The fumble was also a shocking result.  The Patriots managed to have the ball in hand with a little over 2:00 left with a touchdown to win.  A turnover on the second play of the drive was the last thing many observers expected.  The games in some ways were parallel to each other.  Both pitchers were pitching a shutout, blow for blow, while both quarterbacks were going score for score.  The last one to have the ball wins.  Until it doesn’t.

In these cases, both Brady and Clemens played good enough for their team to win their respective games.  The Red Sox offense was not special in 2000 but giving up two runs during the height of the steroid era will typically earn your team a win.  Likewise, Brady’s performance typically will see your team win but he wasn’t outstanding in the game’s biggest game.

But also in both cases, they were outperformed by their counterpart at the same position even though they were never on the field at the same time.  Pedro for his part, shut out a nasty Yankees offense and he outdueling Clemens is obvious.

What has flown under the radar in the Super Bowl aftermath, however, is that Nick Foles outplayed Brady.  And it wasn’t that close.  For all the gaudy fantasy stats Brady put up, he made several key mistakes:  He threw behind Gronkowski for what would have been a TD in the first drive.  He threw behind James White for what would have been a gain into field goal range. Two plays after that Brady himself dropped an easy catch for what would have been a gain to inside the 20.  At the end of the first half he inexplicitly didn’t throw the ball when scrambling and instead was tacked in bounds thus costing the team a chance at points.  In the first half alone those mistakes cost his team a minimum of seven points, and more likely upwards of fourteen.  And the QB has some responsibility anytime they fumble.  He gets credit for always feeling the pressure and moving in the pocket so it should go the other way when he doesn’t.  Also, on the play, he had James White wide open for a first down.  His yards were accomplished throwing to many wide open receivers, quick throws that went for big yards, getting empty yards at the end of the half and the game and just throwing it in the vicinity of the best tight end of all time.  He had very few throws that were downfield in tight windows and/or required pinpoint ball placement.

Meanwhile, Foles was outstanding.  The throw to Corey Clement for the disputed Touchdown for my money is second best throw in modern Super Bowl history next only to the seam pass that Aaron Rodgers threw to Greg Jennings on the Packers final drive of Super Bowl XLV.   He consistently made throws were accurate, into tight windows, managed the pocket well and made key throws on 3rd and 4th downs on their game-winning touchdown drive.  His only mistake was a ball with less than ideal placement on his interception, though it still had to take a crazy bounce off Jeffrey’s hands to be an int.

Roger Clemens in his game took the loss in the aforementioned game  Wins and Losses for pitchers has always been a stat though a W-L record is highly affected by a teams run support.  Winning percentage is a stat for hockey goalies as well even though that is highly affected by the quality of the team in front of them.  Quarterback wins should be no different than those two.  Why?  Because Pitchers, Goalies and Quarterbacks by far have a greater effect on the outcome of a game than any other positions in sports.

The result of the most recent Super Bowl has led some to proclaim that this somehow proves that “Wins are Not a Quarterback Stat.”   Tim Backes at Cheesehead TV makes that case here. But as I outlined earlier in the article, Brady was outplayed so its not the best time to use that card.  I think it conflates Brady fanboys reactions and reliance on the QB win to make their argument with the merits of QB wins as a stat.  After all, this entire argument is basically Tom Brady fans and supporters vs other who support other QBs such as Peyton Manning, Drew Brees and Aaron Rodgers.

The leader of this movement, at least as it pertains to the Packers is Aaron Nagler of Packers News.  He frequently proclaims this and it accounts for approximately 2.87% of his tweet and articles.  But it’s a cause that many Packer Backers fight for.  And the sentiment is easy to understand; Football is the ultimate team sport with 11 starters on each side of the ball.  It’s near and dear to Packers fans due to the team’s abysmal defense in recent years.  Something that Tom Brady fans, haven’t had to deal with, until the Super Bowl.

Good examples of why wins and Super Bowls are not the be all end all can be seen the Brady’s last two Super Bowls when comparing to Rodgers during that time.  Rodgers bs Seattle in the NFC Championship Game did exactly what was needed to do and they still managed to lose the game.  He didn’t light them up but yet again, he didn’t need too.  Their chances of winning were 97-98% most of the second half until the onside kick.   That same year in the Super Bowl Brady had two interceptions and needed a Malcolm Butler interception to gain the win. Last year, Rodgers in NFC Championship and Brady in the Super Bowl, were quite similar in the sense that both quarterbacks played poorly in the first half and scored at will in the second. The difference was Donte Hightower made a key play to get the Patriots back in the game. Of course, if the Packers defense were out there Brady would have never been able to overcome a pick six and a three-point first half.   Meanwhile, Brady got away with playing poorly against Houston in the 2016 Divisional Round, something that Rodgers has never had the luxury of.

But ALL stats have their limitations in every sport.  And even pure quarterback stats have their limitations.  Completion percentage means nothing unless you gain yards from those completions.  (Chad Pennington is 2nd all-time in comp %) Touchdowns are sometimes skewed if a team has a penchant for running the ball inside the 10.  Ints and yards per attempt are probably the best two but those have some limitations sometimes deceive.  And QBs numbers can get inflated in garbage time.  Comparing eras with traditional passing stats is next to impossible.  Bart Starr was consistently one of the top passers in the NFL in terms of Passer Rating but his career rating of 80.5 is poor by today’s standards.  It’s amazing that Bart Starr is the career playoff passer rating leader with 104.8.  And not coincidently he has the best career playoff record at 9-1.

And those don’t even account for QB rushing stats, which sometimes gets confuses and left out all together especially when talking about Aaron Rodgers who consistently gains significant yardage with his feet.  And of course scored a TD on the opening drive of the 2010 NFC Championship Game, though many detractors of his leave that out when citing his stats.  Likewise, with Brady, he is the best QB ever at the QB Sneak, converting them over 90% of the time.  That is very valuable to a team and can significantly increase their chance of winning.  And that doesn’t even dent the box score. Or fumbles.  Or sacks taken.

Of course, there is no room for middle ground.  There never is.  If you are a Brady fanboy, Super Bowl wins are all that matter, if you are in Rodgers camp, they aren’t QB stats.

In reality, they are a stat.  There is a high correlation between wins and quality of quarterback play.  But like all stats, they are not the be all end all and have to be taken as part of the story and not the story itself.  All stats are just a piece and can be used to shape an argument.  As Mark Twain used to say, “There are three kinds of lies: lies, damn lies and statistics.”  Brady’s 500 plus yard performance falls in the third category.

Not going anywhere for a while? Currently, free agency twitter, more books, and more movies are ...read more 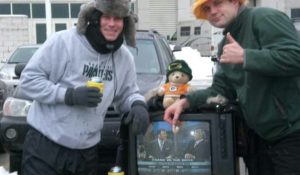