In these mock drafts, I’m going to focus on the first five rounds of the draft.  According to most calculations, the Packers are going to have eight picks in the first five rounds.  Will they use them all in the spots they’re likely to be placed in? No.  That seems very unlikely.  Am I going to sit here and try to guess where Green Bay is going to move around to? No. 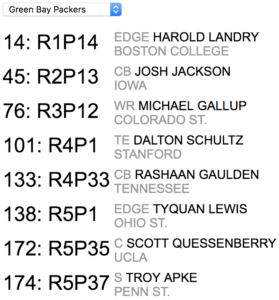 I decided to throw the CHTV draft board out the window and go with my gut here,  I used Draft Countdown’s Big Board, user voted team needs (as always) and the “Difficult” setting.

As anyone who has been following me throughout this draft season will understand, this is as well as I could possibly feel about a draft.  According to my own opinion Landry, Jackson and Gallup are all in the top two at their positions in this class.  If the draft actually went this way from 1-76, just go ahead and shut it down.  I don’t care what the rest of the haul looks like.

Landry’s 2016 tape is the best film for a single season from any front 7 player in this class. An ankle injury caused Landry’s 2017 production to slip, but any question about his explosiveness should be dismissed after seeing his combine performance.

Josh Jackson is a player that I would be doing backflips over if Green Bay selected him at 14.  With their second round pick he’d be the steal of the draft.  His length, natural instincts and ball skills are not things that can be taught.  The areas of his game that are “weak” (and there aren’t many) can be ironed out with scheme from Pettine and coaching from Joe Whitt, Jr.

Gallup is my second ranked wide receiver in this class.  The word that comes to mind over and over watching him is smooth.  He’s smooth in and out of his breaks, his body control is smooth, everything he does is smooth.  Gallup isn’t a physical freak but he understands the nuance of the position and catches the ball with his hands.  I cannot understate how important that hands catching part is.

Dalton Schultz is quickly becoming my favorite TE prospect.  Schultz suffered from absolutely awful quarterback play during his time at Stanord.  He was asked to block people. And block people he did.  He’s the ideal young athlete to groom behind Graham and Kendricks.

Rashaan Gaulden fills a specific role: nickel.  He just might be the best pure nickel cornerback in this class. I like Apke and Tyquan Lewis as athletes with upside that late in the draft.  Both played at hard nosed Big Ten universities.

Mel Kiper (3.0 – Insider)- Marcus Davenport – I get it. I just don’t like it.  If Gutekunst’s desire is to build the roster for 2019 and 2020 Davenport is a fine pick.  He has plenty of upside.  The problem is the Packers haven’t developed outside linebackers the same way since Kevin Greene left.  It’d be better for the 2018 team to get a finished product.

DraftTek – Jersey Al – Marcus Davenport, Carlton Davis, Dante Pettis, Dorance Armstrong, Kevin Tolliver – Al does a great job (with everything), but he and I don’t often see eye to eye when it comes to the draft.  He mixes in a couple guys I love (Pettis, Armstrong) with guys that I’m not crazy about (Davenport, Davis, Tolliver).  All in all you’d have to be pretty pleased with this.

Peter Schrager – Mike Hughes – I’d be alright with it, but not over Josh Jackson.  Hughes also doesn’t fit Green Bay’s height requirement for cornerbacks.  They’ve set up a pre-draft visit with Hughes, so there is at least some level of interest, but I don’t see why you’d rank him ahead of JJacks, or select him that way.

One thought on “PFF: Packers Mock Draft 5.0 with Roundup”