Everyone knows that mock drafts are a dime a dozen at this time of the year. However, I had the opportunity to participate in a mock draft that attempted to ratchet up the realism by being a real-time simulation. Mock of Ages 2018 (@mockofages) brought together 44 “GMs” (some teams had more than one) to participate in a mock draft which mirrored exactly the schedule of the NFL draft (we drafted on Thursday and Friday evening as well as Saturday afternoon) as well as the opportunity to trade picks and players in real time.

The exercise both helped to give a better indication as to the strategies and communication needed for GMs on draft day and, perhaps, added some measure of authenticity that can’t be reached when one person is picking for all 32 teams.

So how did the Green Bay Packers fare? Coming in with 12 picks, we had the ammunition to pull off several trades over the course of the draft, which I have listed below.

Starting with 12 picks, we ended up taking 11 players. So who did we actually end up landing?

Our plan coming into the draft was to target Landry but also to be prepared to take Fitzpatrick, James, or Ward if they fell into our lap. To our surprise, all were gone by the time we picked. We were left mostly deciding between Josh Jackson and Tremaine Edmunds, the latter of which we didn’t expect to fall to 14. In the end, given the depth at CB in the draft and the freakish ceiling of Edmunds (who is only 19), we pulled the trigger on Edmunds who could come in and immediately be moved around between ILB and pass-rushing OLB.

The Packers obviously need help at corner and to rebuild for the future. Although we passed on Jackson in the first round, we were able to pick up a borderline first round talent in Hughes. He will likely play slot corner in the NFL (especially with the Packers favoring taller press corners outside), but he gives the Packers youth, speed, and versatility. Carlton Davis was still on the board here, who we also liked a lot.

Chark is often mocked in the 2nd but fell to us in the middle of the third. He gives the Packers a tall and speedy deep threat.

The Packers love to line tight ends out wide. Andrews is essentially a big bodied receiver who can learn to perfect his game behind Jimmy Graham, the archetype of the receiver tight end.

The need at pass-rusher was perhaps slightly lessened with the versatility of Edmunds now on the roster, but the Packers still need competition for Vince Biegel, Reggie Gilbert, and Kyler Fackrell in camp. In the 4th round, Mata’afa is a project which high potential upside. Hercules played almost exclusively as an interior defensive lineman in college but is far too small to play on the defensive line in the NFL. As such, he projects to an OLB in a 3-4 defense. Can the Packers take his raw pass rushing prowess and mold him into a stand-up pass specialist? A late 4th round pick seemed worth the shot to find out.

A tall, long-armed corner for depth at outside. McFadden will need to improve play speed to eventually fight for starting snaps.

Demby is exactly the sort of player that the Packers have drafted to play the interior of the offensive line for years. In college, Demby was a smart, quick-footed left tackle with long arms. The Packers will slide him inside and let him compete with Justin McCray for the starting RG spot.

Poona has a short, squatty build. He’s not an elite athlete by any stretch of the imagination, nor does he have the height that teams usually like on the defensive line. Still, he’s a gap-stuffing body who will give the Packers depth.

The rebuild at corner continues. Johnson could use a year in an NFL weight room to bulk up. He gives the Packers some depth at slot corner and a fast special teams piece.

You draft a guy like Valdes-Scantling for his measurables and then you see if your coaches can make something of him. This is a guy who is 6’5 and ran a 4.37 40. Can the Packers take that raw material and turn it into an NFL receiver? This is a boom or bust pick, but it’s the end of the 6th round.

Ferguson shares with Aaron Rodgers the history of having thrown the ball at a community college. He was a successful high school quarterback who initially signed with Tennessee. However, after breaking his tibia as a freshman, he dropped from Tennessee and spent his sophomore year as the quarterback for Coffeyville Community College before eventually signing and taking over as starter at Memphis.

Ferguson can throw down the field but his slight frame may be a concern in the NFL. He’ll be a prospect in camp, although it’ll certainly be an uphill battle to make the roster with Brett Hundley and Deshone Kizer hanging around.

Edmunds provides a potential game-changer on defense and an heir apparent to Clay Matthews as a versatile, superstar linebacker. Hughes can push for time immediately at slot corner with McFadden and Johnson adding much needed depth in the secondary.

Chark and Andrews give the offense a jolt of receiving talent. Demby will provide interior depth if not push McCray at RG in camp. The rest of the players here provide depth in camp as they struggle to make the roster.

Of course, not all holes were filled. The Packers still have questions at right tackle. We didn’t end up grabbing a safety to help fill the void left by Morgan Burnett’s departure.

What do you think? If the draft shook out exactly as above, would you be happy with Gutekunst’s first year on the job? You can see the entire draft by checking out @MockofAges. 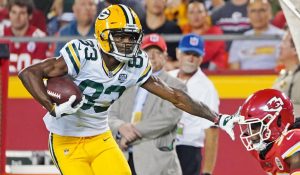