Analysis (Taylor O’Neill): At 6’3 and 233 lbs, Burks has been labeled as a little bit of a tweener at linebacker. He played multiple positions while at Vanderbilt including safety. Accordingly, Burks’ best traits are his speed and his ability to drop back into coverage. He is adept at dropping back and blanketing tight ends or running backs on passing downs.

Still, his size and relative inexperience at the position mean that he will be a situational player and perhaps a bit of a project. His instincts need improvement. He is not a thumper by any means, and he can be a liability against the run as he struggles to shed blocks due to his relatively diminutive size. Nevertheless, Burks is a good athlete who fills a definite role in the pass-happy NFL of 2018. He has the chance to make an immediate impact on special teams. Beyond that, he’s the sort of high character player that Green Bay loves. He was a defensive captain and voted to the 2016 Allstate-AFCA FBS National Good Works Team for his volunteering.

Team fit (Jacob Westendorf): Burks is a former safety that transitioned to linebacker after his freshman season at Vanderbilt. He was athletic enough to play there but asked to play linebacker. He adds another impressive athlete to a Packers’ defense that is beginning to pile up those type of players.

At this point, he slots in as the third inside linebacker behind Jake Ryan and Blake Martinez.

He could be an upgrade as a coverage linebacker in sub packages, replacing that role that used to be occupied by Joe Thomas. He could also eventually overtake Ryan in base packages.
His biggest value early could come on special teams. His size/speed combination makes him an intriguing fit on those groups.

NFL Player Comp (Mike Wendlandt) – Su’a Cravens, Broncos: When looking at Oren Burks, his athleticism is what really stands out, and he compared to a guy like Su’a Cravens, of the Denver Broncos. As a guy who is going to use his speed to fly around the field, he’ll be put in positions to make plenty of tackles. Cravens was an every-down linebacker early but was occasionally bullied around by bigger linemen. Burks isn’t that by any means, but he will see plenty of time in coverage and on special teams.

While Cravens went from linebacker to safety, Burks is the opposite and will move up closer to the line of scrimmage to use his speed. He is at his best in space and could carve out a Craven’s like impact early on in his career. 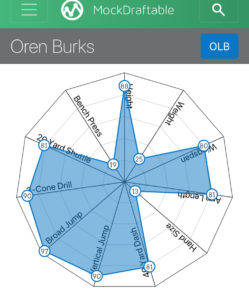 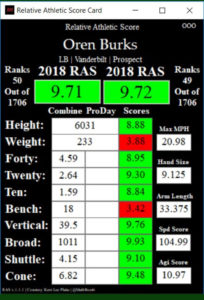 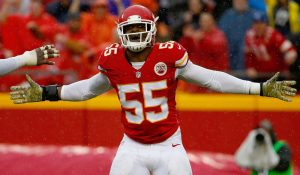 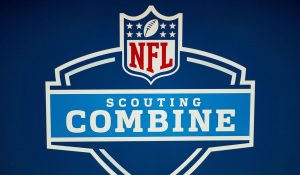