The third preseason game for the Packers wasn’t pretty. Maybe it was the flight out west that messed with the players, maybe it was the field conditions that made the Packers think they were playing the Athletics and not the Raiders. No matter the cause, quite a few players made their roster spots a lot more tenuous as the preseason starts to wind down.  There’s only one game left and it’ll be up to some notable names to perform or risk punching their ticket out of Green Bay.

On the other side, with the struggles of Oakland still in the memory, a few guys may have solidified their spots on the roster. Whether it was due to good play on their end, or poor play by the guys they’re competing with for a spot, here are three guys who may have locked up a roster spot after Week Three.

With Oren Burks injuring his shoulder during warmups, Thomas got significant snaps early and often in the game, and played the majority of it, showing the traits that have many people thinking that he’ll be the more souped-up version of Joe Thomas. Thomas in this game was more instinctive and natural near the line of scrimmage while continuing his impressive work in coverage. He’s at this point the perfect backup to Burks and should be a special teams mainstay as well. It’s hard to see any way that Thomas isn’t on the roster come Week 1.

The Wisconsin-native has had a quiet camp and has drawn a lot of questioning about his play strength and effectiveness as an edge rusher. This writer personally felt that he would be better in the Clay Matthews circa 2014 role as the roving middle linebacker (same with Kyler Fackrell, but that’s neither here nor there). But against Oakland, Biegel put together his best game as a Packer. He was extremely instinctive in sniffing out running lanes and his pursuit angles were significantly better when chasing down quarterbacks. He was able to shed blocks a lot more efficiently as well, using a powerful initial punch to keep tackles off balance. This was the Biegel that fans were hoping to see and hopefully is the first step toward solidifying his Packers spot.

Our final name is one that will frustrate a lot of people, but Jason Spriggs is the #3 tackle in 2018. Against Oakland, he was decent at his natural spot on the left side. He had his moments of inconsistency for sure, namely getting bull rushed straight back because of him being way too upright in his stance. But the good far outweighed the poor in the game and compared to the struggles of Kyle Murphy, Adam Pankey, and the other linemen in the game, Spriggs looked like Chad Clifton. His talent is evident on some plays, while his technical issues also at times raise their head. But he likely has jumped Murphy on the depth chart and will be the primary backup to David Bakhtiari and Bryan Bulaga. 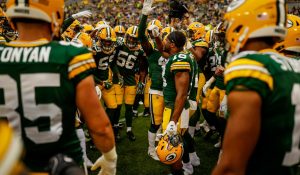