Overall draft pick, I mean. Most draft prognosticators and fans are in agreeance that the most pressing need for the Green Bay Packers is at pass-rusher. Thus, every mock draft you’ll see has the Packers drafting an edge-rusher at number 12, but which one?

Assuming Josh Allen of Kentucky is off the board, Brian Burns of Florida State should be the pick at number 12 for the Green Bay Packers. Whether or not Brian Gutekunst decides to bring back Clay Matthews, the defense simply must generate more pressure on opposing passers. While Mike Pettines’ unit did manage to create 44 sacks in 2018, the lack of a consistently dominate pass rusher continues to hamper that side of the ball.

The legendary Bill Walsh once said, a pass rusher “must be the focal point of your defense.” Although 2018 did bring an unforeseen breakout year from Kyler Fackrell (10.5 sacks), Green Bay currently does not have that type of player on their roster. Enter Brian Burns. Standing at 6’5, 231 pounds, he will need to add size to his frame at the next level. However, his exceptional vision and intangibles make him my clear cut choice for Green Bay at pick number 12. On many plays, it seems as though Burns is lining up offside, as he blows by tackles before they can even perform their kickouts. Often, tackles struggle to even get a hand on Brian as he soars past to attack the quarterback.

The long-armed defensive ends’ tape vs Clemson in 2017 showcases his phenomenal play recognition skills. Burns forced two fumbles in this game, both on read-option looks in the red zone. Number 99 single-handedly kept his team in the game, adding 7 tackles, 2 sacks, and a whopping 4.5 tackles for loss.

Seemingly every-time Clemson looked to make the contest a blowout, there was Burns with another game-altering play. Here Burns demonstrates his ability to not only read the quarterback, but the closing burst to finish and make a play on the ball.

If a tackle does manage not to whiff as Burns breezes by, he can always fall back on his considerable repertoire of countermoves. Number 99 repeatedly separates himself from the pack with his first rate vision, and excellent hand usage. He has very developed hands and utilizes his long arms to establish separation against blockers. Once Burns establishes this position, it’s over for the O-line, as he employs a large assortment of shedding techniques to uncover. Here he demonstrates an exquisite counter-spin vs Virginia Tech:

The stud rusher from Florida State does need to add weight to his frame to succeed at the NFL level. Tackles will be bigger, stronger, and far more intelligent, and he will have to adapt and keep improving to beat them. Burns will also need to improve in the run game. While he easily identifies running plays and seamlessly slips between blocks, he does have a tendency to get bullied at the point of attack. He will have to add strength and learn to lower his hips and plant in order to become a complete player in the National Football League. Keep an eye out for Burns testing numbers on Sunday, March 3rd at the Scouting Combine, where he has an opportunity to cement his status as a top-15 pick.

Like Gretzky to the puck, number 99 always seems to find his way to the football. He sniffs out zone-reads and other fakes like a pitbull, an underrated proficiency now that the jet motion/sweep has become en vogue across the league. The long, lean defensive end is a high motor player, and continually displays closing burst and a strong ability to finish on each and every play. Burns overall skill-set is distinguished by his first class athleticism and nose for the football. His polished repertoire of pass-rush moves, and excellent hand usage dictate that he can be an immediate impact player. Just what the doctor ordered for the Green Bay Packers defense, even more production from good ‘ol number 12. 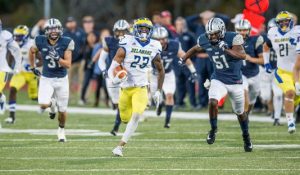 Who knew that a 5'11, 200 pound safety from the University of Delaware would quickly ...read more