With the final draft order set after compensatory picks were released last week, the Packers stand with the following picks scheduled for the 202 NFL draft:

The number of picks is solid, especially considering how historically the Packers have built the majority of their roster with excellent drafts. However, the quality of those picks (in terms of value as draft picks) is lower historically than the previous ten years.

Consider for a minute the NFL Draft Pick Calculator, which gives the total trade value for picks in the draft. Each pick in the draft is assigned a point value as a reference to compare the relative value of picks in different draft rounds, as a means of considering how much a pick is worth.

Since this system has been in place since the days of Jimmy Johnson and the Dallas Cowboys, it has been one of the most commonplace measuring sticks of value in the NFL. Something to note however is the compensatory pick system was introduced after this table became standard in the league, so it does not measure the value of added compensatory picks.

Using the aforementioned calculator, the Packers picks this year are given the points value of 1120 which ranks in the bottom third of the league. For comparison, the Miami Dolphins 14 draft picks with a total value of 4,530 points which is the highest in the league this draft season. That is not exactly a fair comparison though as Miami has a historic draft stable and almost certainly will be trading some of those picks for players on cap-strapped teams. But, it does put in stark terms how few chances the Packers have to grab high-quality players in the early rounds.

Great- so what does this all mean?

What this means is that the Packers most likely will have a very hard time replicating the success they had in the draft last year and in years past, as the quality of the picks is lower than it has been in years. This is the result of a successful season and I am sure that no one is going to begrudge worse draft positioning with the chance to go to the Superbowl last season.

Brian Gutekunst has earned a good reputation after only a year in the GM chair as someone who is not afraid to take big chances when the moment is right in the draft as well as free agency. Last year the Packers had both the available salary cap and one of the strongest class of draft picks, but that position is not to be repeated this year.

While there are fewer roster holes than a year ago, the Packers staff will have to do more with less than they had a year ago. 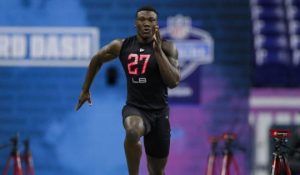 With the combine finished and free agency around the corner, this time of year is ...read more