As the saying goes “the show must go on.” Football apparently is no different. While the entire sports world is on hiatus, the NFL Draft will go on as scheduled from April 23rd to 25th. For the first time in history the draft will be held completely virtually, with team executives making crucial decisions directly from their living rooms.

Most Pro Days have been canceled, thus football evaluators will be more locked in than ever on their late round targets. Here are five prospects for the Green Bay Packers to take a look at on Day 3 of the 2020 NFL Draft.

Reggie Robinson, CB, Tulsa: The Green Bay Packers, like most successful NFL teams, abide by strict athletic thresholds while drafting. For some reason, many tape evaluators seem to forget this fact. That’s no problem for Reggie Robinson. An unheralded corner from Tulsa, Robinson stood out at the Senior Bowl. Then, he blew the combine away with a 4.44 forty-yard dash. While scoring off the charts athletically, Robinson is exactly the type of high upside player the Packers like to target in the later rounds.

Scott Frantz, OT, Kansas State: Green Bay has a fantastic track record when drafting players from K-State. Remember Jordy Nelson? Frantz explodes effortlessly to the second level, dashing aside all in his path. The ability to play in space makes Frantz a perfect fit for Matt Lafleur’s zone blocking scheme.

Davion Taylor, LB, Colorado: Davion Taylor is an explosive missile when moving towards the football. He’s a little green around the edges, having only spent two years playing at the FBS level. However, he possesses all the intangibles to carve out a role as a hybrid defender for the Packers. Taylor has as much upside as any prospect in this class.

Dalton Keene, TE, Virginia Tech: Dalton Keene is another player on this list who has the makings of being a better pro. An extremely versatile prospect, Keene has the ability to contribute as both a blocker and receiver in the NFL. He excels as a lead blocker in the run game. Keene was rarely used in the passing game at Virginia Tech, but has the necessary speed and athleticism to be a run after catch force. The former Hokie’s soft hands are highly impressive. His football IQ, versatility and athleticism would fit right in with the Packers.

Jonathan Garvin, Edge, Miami: Another elite athlete, with the hip fluidity, and flexibility to stick as a starting pass-rusher in the NFL. Garvin uses his length and first step quickness to soar past, and through offensive tackles. The former University of Miami star would be a tremendous fit playing the Kyler Fackrell role in Mike Pettine’s defense. Additionally, Jonathan Garvin will be just 21-years old entering the NFL season. The Packers love drafting younger prospects and molding them into weapons. 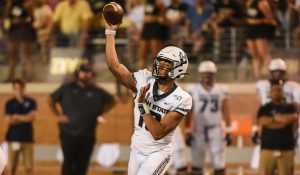 2 thoughts on “Late round gems for the Packers to target”