Going into Monday night’s game between the Green Bay Packers and the visiting Atlanta Falcons, there was a lot of talk about how this could potentially be a trap game for the home team in green.

The Packers were 3-0 and were heavily favored going into the matchup. The offense was without Davante Adams, Allen Lazard, and Marcedes Lewis. The defense was without Kenny Clark, Rashan Gary and Christian Kirksey. On top of that, the winless Falcons — with their backs against the wall — would surely be aggressive in what felt like the biggest game of their season.

From the opening kickoff, it never gave off trap game energy. The Packers controlled the Falcons from the first snap to the last. Green Bay won, 30-16, over the Falcons and now comfortably head into the bye week with an undefeated 4-0 record.

What might be more exciting for the organization moving forward was how well the defense played. Outside linebacker Za’Darius Smith had three sacks — vaulting him to a tie for the NFL lead at five sacks with Myles Garrett. Cornerback Jaire Alexander held Calvin Ridley to zero catches for zero yards and rookie Krys Barnes was making plays all over the field.

The Packers have a lot to be excited about moving forward and can now focus their attention on getting healthy during the bye week while preparing for Tom Brady and the Buccaneers in two weeks.

The defense came out hot and forced Matt Ryan off the field right away with a defensive stop. Rodgers marched down the field on the first drive of the night for the offense and capped it off with a 6-yard touchdown pass to Aaron Jones. Jones was a major contributor on the drive, so it was only right that he was the one able to get in the end zone.

Again, the defense held stout against Ryan and an offense that still had Julio Jones and Calvin Ridley on the field. The offense — gaining momentum — had no trouble driving down the field. One place the Packers haven’t always looked incredibly sharp this season has been next to the goal-line. That showed again on Monday night.

Undrafted free agent Darrius Shepherd ran a route just short of the end zone and came up inches short on third down. Known for his aggressive style of coaching, Matt LaFleur decided to go for it. Jamaal Williams was stuffed on the goal-line and the ball was turned over to the Falcons.

“Certainly in hindsight not a good play call,” LaFleur said. “They were in cover zero and had everybody loaded up in there. Probably should’ve called a timeout when we came out of the huddle and lined up. It just didn’t look good from the jump.”

Ryan and the talented Falcons offense finally woke up, taking off nearly ten minutes of time on a 20-play drive that went over 90 yards down the field. In ultimate bend-but-don’t-break fashion, the Packers were able to hold Atlanta to just a field goal in the situation to make the score of the game 7-3.

The Packers were able to double up before halftime when Rodgers connected with Tonyan for two touchdown passes of 19 yards and 8 yards. The put Green Bay comfortably up, 20-3, at halftime

The Packers came out on offense with maybe the most uninspiring drive of an otherwise fantastic start to four games and were forced to punt. That’s when the Falcons showed some life and went on an 8-play, 62 yard drive capped off by a 5-yard touchdown run by running back Todd Gurley. The extra point was missed, but the score was cut to 20-9.

With momentum favoring Atlanta, Rodgers and the Green Bay offense needed only four plays to respond. Despite the Falcons best effort to tackle Tonyan, the undrafted tight end somersaulted and scored on a 21-yard touchdown pass to extend Green Bay’s lead to 27-9. The touchdown was Tonyan’s third of the night.

Robert Tonyan on this play:

Atlanta’s last touchdown came at the beginning of the fourth quarter — again from a short run by Gurley. More importantly, the Falcons ate up close to eight minutes of clock instead of scoring quickly. Again, the Packers responded by eating up seven minutes of clock and putting the game out of reach with a Mason Crosby field goal, 30-16.

The defense bent again, but didn’t break. Adrian Amos broke up a fourth-down throw to the end zone and the Packers were able to comfortably earn the win on Monday night football.

The Packers have a lot to like heading into the bye week. Though four games, Aaron Rodgers is a legitimate MVP candidate with 13 touchdowns and zero interceptions. Matt LaFleur holds a 17-3 regular season record since he took over and his offense has yet to turn the ball over in 2020. Led by Smith and Alexander, the defense has shown improvement despite injuries.

What’s even better is the fact that the Packers can get healthy for the matchup against the Tampa Bay Buccaneers. It seemed like Kenny Clark, Davante Adams, Marcedes Lewis and Rashan Gary were held out for precautionary reasons and will most likely be back for the matchup. I, for one, can’t wait. 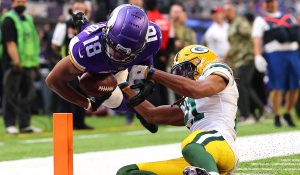 One thought on “Game recap: Packers roll through Falcons”