With the Vikings on the schedule again this week to close out the regular series divisional series, I figured this would be a good chance to take a look at the film from the Week One victory in Minneapolis to open the year to see what the Packers did well and see how that will translate to the gameplan on Sunday.

In my opinion, the drive that highlighted how Matt LaFleur and Aaron Rodgers view this defense was the final drive of the first half, where the Packers took advantage of speed outside the hashes and Minnesota’s defensive priorities started in the 2nd quarter with 6:04 left and ended with a Davante Adams touchdown with 47 seconds left.

This really was a fantastic drive not only because of the result but in how the playcalling and defensive formations allowed Rodgers and the offense to play really in a conservative fashion for this kind of offense and never really broke a sweat. This drive was 12 plays in total, with 11 out of the 12 plays resulting in a positive yardage gain as well as essential time burned off the clock to limit the options the Vikings had on offense during their next possession, which was a great example of the different parts of the team working together as a complementary team gameplan.

To start the drive, the Packers ran a toss left run with AJ Dillion at halfback and Josiah Deguara plowing ahead as a fullback. This play started a theme for the drive, which was to attack the edges of the Vikings defense.

This call was followed by another attack on the Vikings corners and edges. Every play, whether by design or because of how 12 reads the defense, attacks that short left quadrant of the defense. It is well known that the Vikings corner’s are some of the least experienced int he league which has lead to some tough decisions for their defensive playcalling.

When you know that you have exploitable personnel on the field, coordinators can try to mask these potential weaknesses by giving supporting defenders to that assignment, such as having a safety sit atop a cornerback’s upfield zones as a way of limiting that corner defender’s responsibilities 15 yards past the line of scrimmage. However, feeling like you need to keep those safeties deep removes some pressure and coverage options that ensure the offense won’t be facing overload and full out blitzing. These adjustments fix the immediate problems within the defense, but since you are taking important members of the defense and moving them into fixed positions you are giving the offense fewer and fewer keys to read in order to figure out what they are facing and make adjustments to ensure they always have favorable matchups on every play.

The toughest part of facing an offense with a guy like Aaron Rodgers at the helm is that when the defense is forced to play with less than a full deck, he is ruthless in exploiting those advantages. Now that Green Bay has a play-caller with the same kind of mindset, you see an offense that is not forcing their own side to “beat” the defense but rather makes a conscious decision to play against the weaknesses of the defense while keeping a balanced approach

How does this look in practice? Quite simply by hammering the same play patterns and personnel until the defense is forced to react to you, and once you have the advantage of the initiative never let go.

The play below exemplifies these qualities and boils it down to a single matchup- Davante Adams against Mike Hughes on 3rd and 6 with the ball on the 33 late in the 2nd quarter.

The defense is forced to stay with a single high safety look against the Packers who are showing an empty backfield and 5 wide look, which is a relative rarity. This forces the defense-wide and spreads them out and creates a favorable matchup for Davante Adams. With a man-to-man alignment, all Adams has to do is beat his man outside (which he is giving up anyway based on his stance) and get the line to gain in order to be successful. Is this the kind of play that will make Sportscenter? No, but it is the kind of easy gain that gives the offense what they want without taking an unnecessary risk.

So what does this mean? Continued injuries have made an already shorthanded Minnesota defense reach even further down the depth chart, which means that I will expect the Packers to attack them early and often. Expect a lot of flat routes, WR screens, wide tosses, and underneath throws if the Vikings stay with a 2 high safety look. If they add more men to the box or bring the safties down to the line, MVS will have a couple of opportunities to take off the top of the defense. Regardless, I think this Packers offense is in for a feast this week and should make good work of this over-match defense. 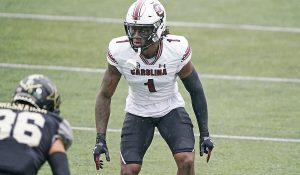 2 thoughts on “Anatomy of a Drive- What Did We Learn From Week One?”