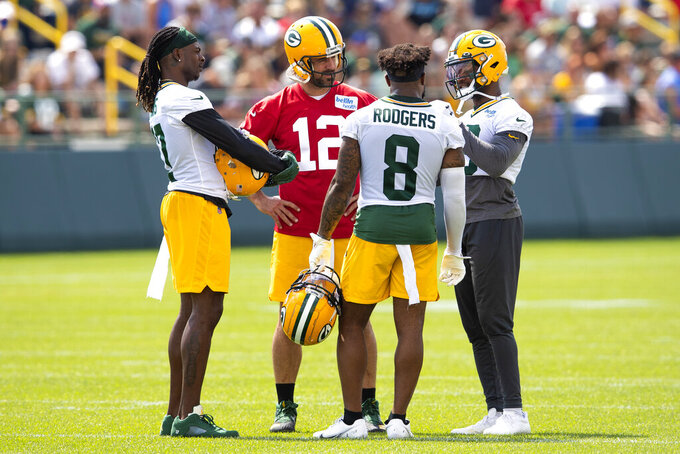 Aaron Rodgers’ press conferences and interview sessions have always fascinated me. I’ve always found the Packers quarterback to be wise and insightful, even when he was younger. It seems the older he’s gotten, the more joyful and peaceful he has become, which in my perspective, has made him more comfortable in his own skin and more open as a person. His Tuesday appearances on the Pat McAfee show are absolute must-watches for Packers fans.

When it comes to Packers rookie WR Amari Rodgers, I find it interesting that Rodgers didn’t single him out during his Wednesday Press Conference. When asked a question about force-feeding Davante Adams, Rodgers responded:

“I mean I’ve never felt like we’ve forced feeded anybody around here, I think we just throw it to the open guy. Tae (Davante Adams) for a long time has been more open than just about everybody else, way more often. I do like the other guys and the way they’ve developed, talked in length about Marquez (Valdes-Scantling) and Allen (Lazard) and having Randall (Cobb) back is huge because he can play 3 positions for us. And then Robert Tonyan’s development”. Rodgers continued:

“We have a unique skill-set of guys where we have an extremely fast guy in Marquez, a guy who can do it all in Davante, Randall who’s an elite slot receiver, Allen who can play inside and outside and be a good blocker at the point of attack, Robert (Tonyan) who’s become a lot better blocker and also an elite pass-catcher and Big-Dog (Marcedes Lewis) who does enough in the pass game to warrant him being out there for a number of plays and dominate the line of scrimmage.”

I don’t believe Rodgers’ omission of Amari Rodgers is a negative, I just found it interesting. It’s very valid to bring up the fact that Aaron and Amari have never played in a single-game together, so it’s reasonable to be unsure of what the rookie WR can bring to the table. Additionally, it’s possible that Aaron is trying to keep expectations tempered for a first year player and not put unnecessary pressure on people, especially when the offense is full of veterans that have had success in the NFL.

So what are the expectations for Amari Rodgers, the Packers 3rd round pick out of Clemson? We should expect to see him frequently in the role Tyler Ervin and Tavon Austin played for the Packers last year as the “Jet-Sweep” motion player.

Amari Rodgers is a more dynamic player than Ervin and Austin and should provide an upgrade to the offense when the Packers run this type of motion.

It’ll be interesting to see how the Packers use him in the slot. Before the acquisition of Randall Cobb, it’s fair to assume that Amari would’ve been the full-time starter at the position. However, now that Cobb is back in Green Bay and is a trusted weapon to the Quarterback, Amari Rodgers’ snaps in the pure slot will very likely be reduced.

It’s not necessarily a bad thing if Amari Rodgers’ rookie season ends up being more developmental in nature. While he will see his share of offensive snaps and is the Packers starting punt-returner, he may have additional time to “process” and learn than he would’ve without Cobb.

Speaking of Randall Cobb, you couldn’t ask for a better player to have come to Green Bay. It’s well documented that Amari Rodgers used to train with Cobb when he was a teenager, and Rodgers has looked at Cobb as a mentor and “a big brother to me” for years. Amari Rodgers’ Dad, Tee Martin, coached Cobb when he played at University of Kentucky.

Expectations for Amari Rodgers should be kept at a reasonable level in the upcoming season. With that said, the rookie WR has a very promising future and will have various opportunities to make his name known in 2021.

previous post No Huddle Radio #51: Saints vs Packers In Jacksonville For Double Road Game!
next post Betting and Odds For Sunday's Game Against The New Orleans Saints
Back to top
mobile desktop