The playoffs have finally arrived in Green Bay, Wisconsin. On Saturday night the Packers host the surging San Francisco 49ers for the right to advance to the NFC Championship Game. The 49ers boast a ferocious run game and a dynamic defense. They have fought through back-to-back road games to get to this point and are battle tested headed into the Frozen Tundra. The 49ers will be a formidable opponent and it will take a full 60 minute effort from the Packers to secure a victory. Green Bay will need the biggest games of the season from some essential players to power the Packers to a 3rd consecutive NFC Championship Game.

This game will be won or lost in the trenches, especially when the Packers are on defense. In week 3, Kenny Clark dominated the 49ers interior linemen, wreaking havoc in the backfield throughout the game. This is a game where Clark must take over. The 49ers specialize in deception, particularly in their run game, forcing linebackers to make decisions based on a lot of moving parts. However, immediate interior disruption will render all that eye candy mute. Clark is very capable of creating that chaos.

Luckily for the Packers, Clark is a 3 down player, where he also excels in collapsing the pocket. Against what will likely be a beat-up Jimmy Garoppolo, interior pressure will undoubtedly be key in forcing him into some bad decisions. Clark, coupled with the return of Za’Darius Smith could be exactly what the doctor ordered to take over the game on defense.

This week that consistency will be key. The Joe Barry is going to need to rely on his veteran safety to be in the right place at the right time, even with all the confusion. With the aforementioned 49ers offense running the ball over 50% of the time, expect Amos to be often roaming near the line of scrimmage to tilt numbers in the Packers favor. It will be critical for him to diagnose plays correctly to avoid being moved out of place by all the movement the 49ers offense presents to defenses. Amos’ versatility and intelligence should shine Saturday and if the Packers emerge victorious, his play will be a major reason why.

This game is shaping up to be an AJ Dillon type game. When the Packers drafted Dillon in the second-round last year, this is the exact scenario they envisioned. Playoffs in January, freezing temperatures and a 250 back such as Dillon are a perfect match. In a game where ball control and possession are going to be critical, having a running back that pick up the tough yards is going to be essential. The more that they can keep the 49ers defense on the field in the Frozen Tundra, the more they can break their will.

Dillon has also shown a great deal of ability in the passing game. This new factor helps to keep the 49ers defense from keying on the run when he’s in the game. When on the field at the same time as Aaron Jones, this gives the Packers a lot of flexibility to put their playmakers in advantageous situations. Look Matt LaFleur to lean heavily on the bruising back and put a heavy load on both of their shoulders. 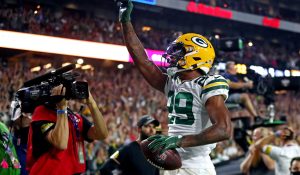 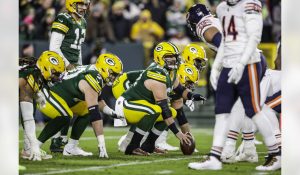 One thought on “Packers Who Will Power the Packers Past 49ers”