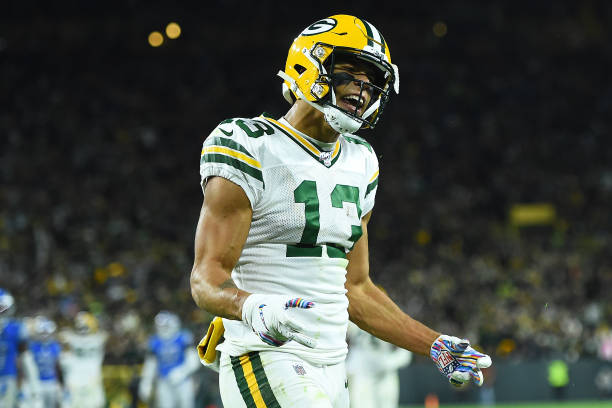 The Packers offense had another successful year in the 2021 regular season. It ranked second overall in offensive DVOA and was top 8 in both rushing and passing DVOA. Of course, that led to the coaching staff was going to get pillaged. The Packers’ offensive coordinator, QB coach, and tight ends coach have all left. And the O-Line coach was promoted to offensive coordinator. There will be changes, even if they’re subtle, to the offense going forward.

Today, I wanted to explore some not subtle changes that could be made to the offense. We’re in full off-season mode. Here’s are four crazy things the team could do.

Lazard has had an up and down career in Green Bay. He’s had several week runs where he looks like a legit number two receiver. Like Green Bay’s version of Robert Woods. And then he doesn’t even seem to be targeted for the next bunch of weeks – relegated to that hip position blocking in the run game behind the tackle.

Coming out of Iowa State, Lazard was scouted as a tight end by many. He has plus run blocking skills and was over 6’4” and close to 230 pounds. His 40 time of 4.55 seconds is just 37th percentile for wide receivers; it’s 92nd percentile among tight ends.

After Robert Tonyan went down this season Lazard did start to be used more in the hip position and even caught a long pass on the famous Shanahan-tree leak play where he acted like he was blocking in the run game and then ran right past linebackers downfield.

Lazard is at his best when he’s run blocking and using his speed plus frame combination against shorter and slower linebackers and safeties. He just doesn’t get open naturally against corners very often.

Making him a tight end would force the defense to choose whether to cover him with a linebacker (who he beats 9 out of 10 times on the route) or with a defensive back (who he blocks into oblivion on a run). Put him in the best position to succeed.

Remember these are meant to be crazy ideas. When the Packers installed the jet motion package during LaFleur’s first offseason, they used Aaron Jones as the jet motion man. Get him back into the slot, either full-time or part-time.

There isn’t a player on the team right now who would do better on jet sweeps and Jones has shown he has some level of ability running short routes and catching the ball.  If you ranked the team’s best catches over the last three years, I bet Jones would have three or four of the top ten.

Give Jones an offseason to work on route running and install the option route that the Saints used with Michael Thomas (and Alvin Kamara), the Rams use with Cooper Kupp, the Bucs use with Chris Godwin, and the Patriots used with Julian Edelman and we’re cooking with gas.

Use More Gap Scheme in the Run Game

New Packers offensive Coordinator Adam Stenavich has plenty of experience in the Shanahan scheme in the NFL: three years in Green Bay with Lafleur and two years with the 49ers before that. He also has experience in the Harbaugh-type run system from his time at San Jose State.

The zone run scheme excels with versatile and athletic linemen who get ahead of the defensive lineman in front of them and try to seal them away from the run. With gap scheme, there’s more pin and pull type blocking. Where one lineman pins the defender away from the run and the next pulls to lead block for the runner.

Jones and Dillon would both likely succeed with gap scheme runs. At San Jose State, Tyler Ervin had a 1,600-yard rush season in this system.

The Packers don’t need to major in gap runs, but they should use more to diversify the run game.

Use the No-Huddle Spread

Here’s where we tie it all together.

When Mike Shanahan combined the west coast offense’s passing game with Alex Gibbs’ zone run scheme in the 90’s he created the first version of the offense that will now be run on at least 10 teams next season, and possibly up to four or five more depending on how the remaining hires fill out.

Since then, the offense has evolved in different ways. The Rams run it almost exclusively out of 11 personnel with constant jet motion and shifts. The 49ers run it with hybrid players, focus on YAC, and use the gap scheme runs we talked about above. The Packers, for the last three years, ran it with more RPOs than almost any team in football. It might be time for the next evolution: spread no-huddle.

Even though the Shanahan tree teams have subtle differences, most of them still spend a lot of time in tight, condensed formations, with all 11 players in the box. There are obviously benefits to this, and that’s why they all do it, but let’s explore what spreading out could do to the offense.

The most extreme way they could do it is with the “superspreader” which is itself an evolution of the Briles Baylor offense. You use three or four wide receivers, and they line up as far as possible away from the o-line. You may have seen this from teams like Ole Miss, Tennessee, or Arkansas in college football this year. The farther the receivers are from the line the more it puts the defense in conflict.

If you cram more defenders in the box, there are easy screens and now throws to the receivers. If you leave a light box to go defend the receivers, AJ Dillon and Aaron Jones have a lot of space to work with.

And then you add tempo. LaFleur talked a lot about using tempo in his first offseason and the team never has. That’s because Rodgers likes to milk every last second of the play clock to try to figure out what the defense is doing. If you superspread out the offense, the defense has to declare what they’re doing. There’s just too much space for a linebacker to attempt to split the difference between the box and the receivers.

Once you use tempo, you can put defenses in a bind by going back to a tight formation. Think about a spread formation with Aaron Jones and Allen Lazard spread out wide and AJ Dillon in the backfield. If the defense responds with extra defensive backs, you move Jones to running back on the next play and Dillon and Lazard lead block.

This type of offense is superspreading (get it?) in college football right now and can easily be adapted to the series football approach of the Shanahan scheme. You can run flood concepts, screens, zone runs, play action boots, and anything else they want out of these formations. You just do it faster and more spread out. 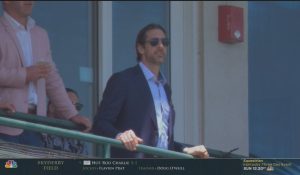