Gratitude. That was Aaron Rodgers’ main message on his appearance on the Pat McAfee Show on Tuesday, February 22, 2022. After posting a cryptic and reflective Instagram post late on Monday night, many people took it as Aaron Rodgers’ retirement was imminent. Then, once, it was announced Tuesday morning he was going on the PMS show, rumors ran wild and 100K plus viewers tuned in live to watch.

Let’s do a quick recap of what was discussed.

Right off the bat, sporting an awesome The Office shirt, Aaron had a disclaimer. He stated that to the “few people that are watching”, there will be no news and no decision made on the show today. Okay, deep exhale.

Rodgers alluded to that it was just going to be a regular “Aaron Rodgers Tuesday” on the show. That is somewhat true, but there were some important things asked by Pat and the boys, and Rodgers did give us some information to work with.

There was an interesting nugget about Davante Adams that I think got lost in all the quotes and discussions. When talking about how Tuesday is the opening day for franchise tags, Rodgers said there is mutual interest on both parties that want to get a possible long term extension done between the Packers and Davante Adams.

Aaron Rodgers posted a cryptic and very reflective Instagram collage and caption late Monday night. Pat McAfee knew he had to get something from Aaron about that, as that is the main thing that sparked all the retirement rumors. The main take away from that is this quote from Aaron: “There’s nothing cryptic about gratitude.”

Aaron’s reasoning for that sappy Instagram post was that he just came out of a 12-day cleanse and diet (The PK cleanse?). He claimed this both healed him physically and took his mental stress away. Aaron’s first thought out of the cleanse was intense gratitude. He kept emphasizing the lessons he has learned and the growth over the past year.

The last picture on that Instagram collage was a picture of Randall Cobb and Davante Adams standing for the National Anthem, with a void where Rodgers is usually standing between the two of them. This caused fans and the NFL world to freak out, claiming it was a subtle hint at retirement.

Pat hypothesized that it was simply Aaron being appreciative of Adams and Cobb for them thinking about Aaron in that moment when he couldn’t be there. Aaron confirmed this notion. This was the game in Kansas City Aaron had to miss because of his Covid week, and Randall and Davante were honoring him. Aaron got serious and said he cried when he saw that photo initially, and it is one of his favorite photos from this past season. So, in short, more retirement rumors silenced, for now.

Aaron and the guys on the show covered many other topics, a lot pertaining to Rodgers’ personal life and Covid stance, so I’m going to stay away from those topics. My goal with this article was talking about Aaron Rodgers’ football future.

A few other notes:

Pat tried to get some information out of Rodgers on his thought process behind his decision. Aaron emphasized taking care of his body as a priority and has a worry about physical deterioration. Whenever Aaron retires, this is not going to be a Big Ben or a Phil Rivers situation where he is hobbling around for a year and playing below average football.

Aaron mentioned his postseason meetings with Matt LaFleur, Brian Gutekunst and Russ Ball went way different than they ever have, in a good way. Rodgers claims they had super honest and positive conversations. Aaron wants to talk to more people, though, and mentioned new QB coach Tom Clements, who he has a history working with and spoke very highly of.

After his cleanse, Aaron’s body is feeling great. He wants to be fully reset to where he wants his body to be. A quick theory: I mentioned that Rodgers was wearing a The Office themed shirt during this interview. On the day that Aaron showed up for training camp last season, after the long dramatic offseason, he was wearing a different The Office shirt. Rodgers is a guy who likes to play things up, and knows what he is doing most of the time. This could mean nothing (probably), but what if it is a hint that he is coming back for another run at a Super Bowl title for Green Bay? How ‘bout that for a theory!? 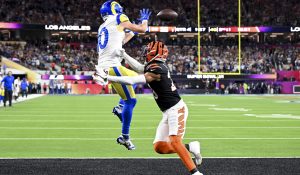 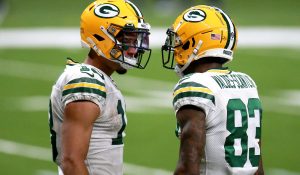