The Packers continue their MO of using late round picks on players with elite traits, selecting Carpenter with their first of four 7th round selections. Carpenter is an imposing presence at 6′ 3″ and 230 lbs, and started in 41 of 46 games at Georgia Tech over his 4 year career as a hybrid safety and linebacker. He finished 2021 with 65 tackles and 3 passes defense. He was able to showcase his versatility at the Senior Bowl where he took reps at linebacker. His stock rose even higher after his Pro Day where he ran a 4.52 second 40 yard dash, and logged a 39″ vertical and 11-4 broad jump.

The Packers clearly had their eyes on Carpenter, as he becomes the 4th draft pick that had a pre-draft visit with Green Bay. Carpenter will have an immediate role on special teams for Rich Bisaccia given his physical attributes. This is an area that the Packers clearly needed to upgrade after once again finishing the 2021 season with the 32nd rank special teams unit, per Rick Gosselin. Long-term Carpenter has a chance to fill as a hybrid linebacker role that the Packers have rotated players through. After seeing both Henry Black and Kevin King struggle in this role in 2021, it was obviously one they were looking to upgrade.

No Huddle Radio #90: What You Need to Know About Kingsley Enagbare 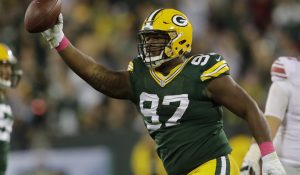