As the dust settles from the 2022 NFL draft, the full picture of what the 2022 Green Bay Packers are going to look like. They added 11 players during the three day event and afterwards, the roster looked radically different from when they started. Two positions in particular look primed with talent additions and are the Packers most improved position groups going into the next phase of the offseason.

Going into the draft, it was clear that the Packers need an infusion of talent and competition to the receiver room. And oh boy did they get it in the trifecta of Christian Watson, Romeo Doubs, and Samori Toure. The crown jewel is clearly second rounder Christian Watson, who is an athlete that makes other athletes seem like regular people. He profiles similarly to to Hall of Famers like Calvin Johnson and Randy Moss. To be clear, he shouldn’t be spoken in the same breath as either of those players at this point, but it’s thrilling to see that type of receiver in Green Bay. The sky is truly the limit for Watson. How quickly he can adapt to the NFL will be essential to how much he contributes in year 1.

Romeo Doubs came to the Packers at pick 132 in the fourth round. An extremely productive receiver at Nevada, he also has extensive experience on special teams as a returner. He instantly becomes the best returner on the roster. He is a threat to break a big return each time he touches the ball, averaging over 12 yards a return. Beyond the obvious special teams contributions, the Packers will also look to use him as a downfield threat in year one, being a piece to the puzzle in replacing the departed Marquez Valdes Scantling.

The wild card of the group is 7th round pick Samori Toure. While not as naturally athletic or fast as Doubs or Watson, Toure is a productive receiver who knows how to get open and what to do with the ball in his hands. He will have to cut his teeth on special teams in year one, but with Rich Bisaccia rebuilding the unit from scratch, he definitely has a chance to turn heads.

These three additions join returning veterans Randall Cobb, Allen Lazard, and second year man Amari Rodgers along with veteran addition Sammy Watkins. Together they make a diverse room of skillsets full of potential. Together, they can provide Aaron Rodgers with an array of weaponry to establish a consistent passing attack in 2022.

The Defensive line got a big boost early and another addition late. In round one the Packers took Devonte Wyatt giving the Packers a fearsome partner for All Pro Kenny Clark. Wyatt was one of the best pass rushing defensive tackles in the draft this year. He has a great combination of skill, power, and hustle and is a pretty polished player already. As a pass rusher, he is a force in collapsing the pocket. Alongside Clark, the two of them are going to be wreaking havoc on interior lines immediately.

In round seven, the Packers added Jonathan Ford, who is a mammoth of a man at 6’5” and over 330 pounds. He’s a classic two down run stuffer who will need to learn how to play to his size in the NFL. If he can contribute on early downs, he could push for a roster spot but could need a year on the practice squad.

Adding both to a rotation of Dean Lowry, TJ Slaton, newcomer Jarran Reed and the aforementioned Kenny Clark gives the Joe Barry a healthy rotation of big men going into 2022. Combined with wild card UDFA hold over Jack Heflin, who could also make a jump in year two after spending most of his first NFL season on the practice squad. A combination of fresh faces and development this preseason could give the Packers their deepest defensive line they’ve had in nearly a decade.

Over/Under: 3.5 Devonte Wyatt sacks as a rookie? – Powered By PickUp 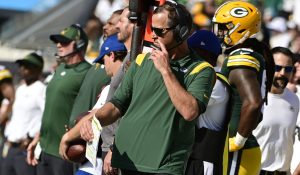