With the departure of Billy Turner, the Packers right tackle position is up for grabs. Pro Bowl left guard Elgton Jenkins may be a candidate for the job when he returns from his ACL injury. However, Jenkins will likely not be ready for the start of the season and the Packers may even elect to keep him at left guard. This leaves Green Bay with a number of guys who will compete for the starting job.

Nijman filled in very well at left tackle for David Bakhtiari and Elgton Jenkins last season. The former undrafted tackle has developed well in Green Bay. The Packers have given him every chance to succeed and Nijman has held his own when given opportunities. The starting right tackle position will be his biggest opportunity to date. He will certainly be given a chance to show what he has on the right side during training camp.

Newman was the Packers starting right guard last season. As a rookie, he had some ups and downs but showed that he has the potential to be a starting OL for years to come. Newman will likely receive some RT reps in camp, but it appears as though he will revert back to his RG position where his occasional struggles will be less disastrous.

The Wisconsin native spent most of his rookie season last year on the Packers practice squad. After signing a futures contract after the season, Van Lanen has been given RT reps throughout the offseason program. The Packers appear to like his development but it will still be a long shot to earn the starting job. A backup guard/tackle role is likely for Van Lanen this coming season.

Brian Gutekunst drafted three OL who may all get a shot at the starting RT job. Third round pick Sean Rhyan and fourth round pick Zach Tom may be among the favorites for the job. The Packers have had success with mid round picks on the OL and these two will certainly get a chance to show they have the tools for the job. Seventh round pick Rasheed Walker is a long shot for the starting job and will be in competition for a reserve job on the OL.

Right tackle will be one of the biggest position battles that we will see throughout the preseason. A handful of players have a realistic shot to earn the job. Reps will be extremely valuable and it will be fascinating to see who comes out on top. Even then, whoever wins the week one starting job will have very little wiggle room. 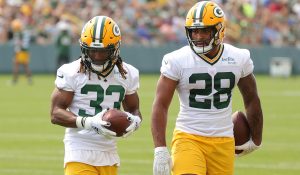