The Packers-Buccaneers matchups have been one sided since Tom Brady’s arrival in 2020. Green Bay was trounced in an early season matchup in Tampa back in 2020. They followed that up with a defeat in the NFC Championship game that same season. The Packers are certainly hoping to turn the tide in 2022, and despite the Bucs missing a few key pieces with both WR Mike Evans and DT Akiem Hicks set to miss the matchup – they will have their hands full doing so.

The Packers have struggled to get traction in the run game against the Bucs stacked fronts. And Aaron Jones in particular has struggled. In the two matchups in the 2020 season, Jones combined for a total of 42 yards rushing (on 16 carries), and 33 yards receiving (7 catches). The first two games of this season have shown just the impact he makes on this offense, especially in the post Davante Adams era.

His ability as a runner, but also his involvement in the passing game is vital for the Packers to move the ball against Tampa’s stout defense. And with David Baktiari’s status still unknown, running the ball and slowing down Shaq Barrett and the rest of the pass rush will be key. He is PFF’s highest graded rusher thus far, averaging 9.1 yards per carry through 2 games. The Packers will need him to have a big impact if they hope to have success on Sunday.

Clean up the Tackling

The Packers were one of the better tackling defenses in 2021. But they’ve struggled with it the first two weeks of the season. They rank 31st as a defense in tackling per PFF, with 20 missed tackles in two games. This is especially troublesome for a defense that is predicated on playing zone and preventing big plays. And now they will face Leonard Fournette – who is tied for 1st in the NFL in runs of 10+ yards, and 5th in the NFL in yards after contact. Bucs OC Byron Leftwich will no doubt try to get Fournette going early, especially with their injuries at WR, and seeing how David Montgomery was able to make hay against this Packers defense.

It’s no secret that Tom Brady is not the most mobile quarterback in the league. But at 45 years old, there isn’t much that he hasn’t seen. So exotic blitz packages are not the answer. And in 2021, he completed 67% of his passes for 1400 yards, 14 TD and only 5 INT’s when blitzed. But if teams can generate pressure without blitzing, that story changed dramatically. And the Bucs have faced a rash of injuries along the offensive line, starting with center Ryan Jensen. Starting tackle Donovan Smith missed last week with an elbow injury. Now his replacement was also just placed on IR.

This all bodes well for the Packers trio of pass rushers in Rashan Gary, Preston Smith, and Kenny Clark. The Packers have yet to blitz this season, and part of that is due to their ability to win one-on-one matchups up front. If the can manage to get pressure without having to blitz, they can disrupt Brady. When under pressure a season ago, his completion percentage dropped to 44%, and his turnover worthy plays doubled. 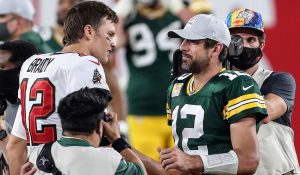 2 thoughts on “Packers-Buccaneers Keys to Victory”