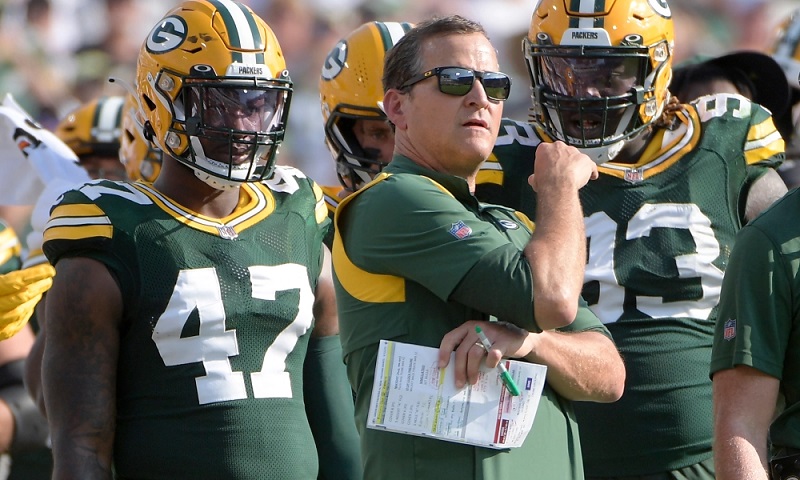 The season is over and for the 11th straight year, deficient defense is a big part of the reason. When it mattered most in week 18, the defense buckled and allowed Detroit to just about run out the clock. You’d be hard-pressed to find a Packers fan who wasn’t campaigning for Joe Barry to be fired for most of the season.

The arguments for his dismissal are obvious and easy to find. The arguments for keeping him for one more season are few and far between. Since LaFleur has all but announced that Barry will be back, we may as well consider those takes.

The team’s late season improvement was legitimately impressive. A defense that couldn’t stop anyone prior to the late bye week was 4th in DVOA following it. “But the best QB they faced was Jared Goff,” you say, plainly ignoring the fact that DVOA is an opponent adjusted stat.

Disirreregardless of who the opposing QBs were, it is an objective positive that Barry and his staff were able to identify issues with the scheme and adjust at the bye week. Of course, it would be nice if the adjustments came earlier, but who knows what level of self-scouting went into the changes.

Likewise, the gameplan flexibility to go from leaving Justin Jefferson wide open double digit times to shutting him down is what you want in a coordinator. We’ve been through a ton of games where Dom Capers or Mike Pettine were taken advantage of because they refused to adjust. There is obviously still some of that with Joe Barry, but the flexibility this season was promising.

Sometimes good defenses take time. Dennis Allen’s first few years on the Saints and Robert Saleh’s first few years with the 49ers were bad. It takes time to find players that fit what you want to do, train them up, and adjust to the ever-changing offenses in the NFL. 49ers fans en masse wanted Saleh fired after his first two seasons in San Francisco because he was stubbornly sticking to the Pete Carroll Cover-3 scheme and it wasn’t working. Eventually, he made changes and now the defense has been elite for several years.

The Players Didn’t Help Much

Packers writers Zach Kruse asked Twitter yesterday which players on the team improved the most in 2022 relative to 2023. It’s hard to answer anyone on defense. Kenny Clark, Jaire Alexander, and Preston Smith were stalwarts on defense, but they were that already. De’Vondre Campbell, Rasul Douglas, Eric Stokes, Adrian Amos, and Dean Lowry all regressed. Rashan Gary had a season-ending injury. Jarran Reed was meh for 90% of the time. Darnell Savage was benched for a special teamer.

Of course, player underperformance can often be laid at the feet of the coaching staff. Good coaching staffs that put players in the right position and coach technique well don’t have double digit players regressing in the same season.

I think it’s a mix. Good coaching can only go so far. No coach gets everything out of every player and not every play can be turned into a star with good coaching. Good coaching gets you halfway there, but the players need to do their part as well.

The Team Can Get Him Help

More and more teams are hiring consultants (usually coaches who were recently fired and are still making plenty of money from their old team) to help with scheme and coaching. The Eagles did it with Vic Fangio this season and the Titans started doing it with Jim Schwartz last season. Both teams have performed far better after hiring the “consultant” than before.

Bring in someone with new ideas, new ways of looking at film, and more time to self-scout. I think this would be the perfect spot for Jim Leonhard.

It’s unlikely that Leonhard will become the full-time defensive coordinator for the team, but it’s relatively likely that he will want to sit out a year before making the jump back into college football or to the NFL. Why not spend that year driving to Green Bay a few times a week?

Leonhard can teach the staff the creeper blitzes and simulated pressures that he learned from Dave Aranda, he can convince them that it’s worth being better than bottom 3 at stopping the run, he can pitch in opinions on draftable players, and maybe he can relate a little better to the younger players on the team.

And if the defense starts out terribly next season, Leonhard could be the potential interim-to-full-time replacement for a mid-season Barry dismissal. It’s close to a foregone conclusion that Matt LaFleur will be seeking a new defensive ...read more

previous post No Huddle Radio #122: Parting Thoughts
next post The Packers Top 10 Moments of the Season
Back to top
mobile desktop