As a journey begins, there is always a ton of hope; a hope that is fixated on the end. The goal is the guide for our lives, for the journey so to speak. So when the goal is not achieved and the journey comes to a sudden stop, it is easy to feel a sense of loss, an empty feeling deep inside. It’s almost like we missed something that we will never see, hidden away, never to be found. But what we don’t realize is there are two treasures, two goals on a journey. Even though this Green Bay Packers team has not been able to find the end goal in quite some time, there is another treasure that can be found. This treasure, this goal, is the journey itself. This isn’t to say that one shouldn’t be sad about the end, but we can enjoy the journey. So in an attempt to remember the journey, let’s look back the Packers Top 10 Moments of the Season.

During training camp, the offense seemed to be struggling and was having a tough time adapting to the departure of Davante Adams. The Packers second round pick Christian Watson missed most of training camp and so things seemed grim – but then something happened. This year’s training camp star Romeo Doubs started to turn heads. He was making great hands catches and splash plays. There was even a Twitter movement #Doubszn.

This was a huge moment this season because the Packers finally won a game they should have won. This was also the first time the Packers won back-to-back games since weeks 2-4. This helped inspire a late season run. This would also be the weekend where everything broke the Packers way toward a possible playoff run.

Number 8: Romeo Doubs vs. the Bills

Romeo Doubs had a better statistical game this season against the Buccaneers but his game against the Bills felt more dominant. He had four catches for 62 yards with yards per catch being 15.5 yards. It also felt better because of an insane catch in the end zone that gave the Packers hope for their young offense. The Packers may have lost, but hope was reestablished thanks to Romeo Doubs.

When the Packers beat the Bears in Week 2 and tied the most total wins in NFL history, it felt like Green Bay was going to claim the top prize and extend it by a large margin this season. The Packers didn’t finally take it though until the Week 13 contest against the Bears. Leading up to this game, the Packers had a record of 1-7 since Week 5. They needed a win and they did it in a comeback fashion in the fourth quarter. This started a four-game winning streak and officially gave the Packers the most wins in NFL history.

Number 6: Jordan Love vs. the Eagles

During a Sunday Night Football game against the number one team in the NFL, the Packers found themselves down against the Eagles when Aaron Rodgers was injured. Enter Jordan Love. Jordan Love performed admirably against the best team in the NFL. Jordan Love completed six passes out nine attempts for 113 yards, one touchdown, and had a passer rating of 146.8. This game really gave a ton of hope to Packers fans for if this offense were to be run by Love instead of Rodgers.

The Packers had to play against the Buccaneers in an early season contest. This game was scary going into the season because the Packers in Florida and California have not done very well. This is especially true when playing against Tom Brady. This game was not the offensive explosion that we all expected. It was a defensive game that ultimately came down to the Packers defense stopping Tom Brady on a two-point conversion play to tie the game.

Packers were in a must-win game against the Dolphins on Christmas Day. They had finally won two games in a row and everything broke their way in the standings. The teams that needed to lose lost. All the Packers had to do was win in Florida, where they have struggled against one of the most potent offenses in the league. The game began with the offenses moving the ball well. This was especially true for the Dolphins. But the Packers were able to keep it close when the defense showed up and got three turnovers. This allowed the Packers back into the game and to earn the victory.

Keisean Nixon didn’t start returning kicks consistently for the Packers until playing against the Commanders in Week 7. Nixon went on to have a breakout game against the Eagles in Week 12 setting up his bid as AP All-Pro Kick Returner for the 2022 NFL Season. Watching Nixon become the best returner in the NFL has been quite the joy this season.

Christian Watson was not doing well during the first half of the season, but during a game against the Cowboys, Watson began to emerge as a star. Watson scored not once, not twice, but three times in a dominant win against the Cowboys. This began a stretch of play where Christian Watson scored seven touchdowns in four games. This stretch was nothing but dominant for the rookie and gave us a look into how good Watson could be.

Number 1: Beating the Vikings in Week 17

To have any hope of making a run to the playoffs, the Packers were going to have win against their rival, the Minnesota Vikings. The Packers at this point in time had won three straight games and had everything fall their way. They just needed to win. And win they did in this contest against the Vikings. The Packers scored on special teams with a Keisean Nixon return, they scored on defense, and obviously on offense. The Packers dominated the Minnesota Vikings to a 41-17 victory (41-3 if you don’t count garbage time touchdowns by the backups). This game was the first time that it was fun all the way through watching a Packers game.

This season was a hard one for the Packers and it’s okay to be sad about how it ended. Try to focus on the positives and always enjoy the journey. Lastly, keep perspective. I’m already looking forward to next season’s journey and am ready to be hurt again. 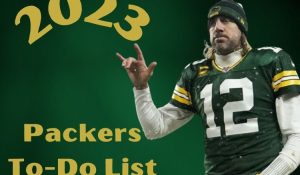 Week 17: Packers' Journey to the Playoffs

Week 17: Packers' journey to the playoffs continues this week. This has been an improbable ...read more

One thought on “The Packers Top 10 Moments of the Season”