The Green Bay Packers seem to spend each offseason lately at the salary cap ceiling. It’s become a yearly ritual, honestly. Regardless of a player’s performance, fans are left questioning whether or not they’ll be back next season. Or if they’ll become a cap casualty. One player in Green and Gold that seems to always find himself on that bubble, is Preston Smith.

Preston Smith is no stranger to a contract restructure as he’s already done it twice since signing with the Packers in 2019. So, if the Packers decide to go that route, there’s a chance Smith could be open to yet another restructure to help the team save some cap money. But with 2023 marking Preston Smith’s ninth season in the NFL at 30 years old, should the Packers make that move and kick the can down the road?

2022 was another good season for number 91. Statistically, he had 50 total tackles, 8.5 sacks and 1 forced fumble. This season, he had the third highest sack total, and second highest tackle total of his career. So, if you want to use Father Time as a reason to let Preston Smith walk, you’re going to be wrong on that one. Smith led the team in sacks this past season. But there could be a little asterisk on the fact that the Packers lost possibly their best pass rusher in Rashan Gary to an ACL injury halfway through the season. Gary ended the season with 6 sacks still while he was on track to possibly come away with 12 or more.

Even with the loss of Gary on the opposite side, Preston Smith still continued to hold his own and remain a disruptive force for the Packers’ defense.

One factor that could way in to whether or not Preston Smith is released, is the emergence of rookie OLB Kingsley Enagbare. When Enagbare was drafted late in the 5th round, many projected that he could be a steal. This was given that several mock drafts had him going late in the 2nd round. Apparently, it was poor performance at the combine that led to his drop. I seem to remember Larry McCarren stating that “a player can’t truly be judged by their performance in the underwear Olympics” referring to the combine. Obviously, this was true for Kingsley Enagbare. Despite the shorter workload at the beginning of the season, Enagbare walked away with 31 tackles and 3 sacks. Many of which were tackles for losses. Enagbare showed a lot of burst in the pass rush during the time he was allotted. As well as a knack for making the big play against the run.

Kingsley Enagbare could definitely have a great future as a pass rusher in Green Bay. So what does that mean for Preston Smith?

Well, there is definitely a chance that Enagbare could take Preston Smith’s spot on the roster for years beyond 2023. If he’s given the same workload the Smith had this season, there’s a chance he could’ve come up with the same numbers. Obviously being on a rookie contract, Enagbare would be much cheaper than Preston Smith. Especially, if they end up producing the same, it would be a no-brainer to let Smith walk and Enagbare roll.

In week 9, the Packers lost their best pass rusher, Rashan Gary, to a torn ACL. It was supposed to be Gary’s huge breakout year. Instead, he had to watch half of it from the sidelines.

There’s little question in my mind that Rashan Gary likely would’ve walked away from the 2022 season with a career-high in sack total with 12 or more if he hadn’t had his season shortened. With the extra attention on Gary as the season progressed, perhaps Preston Smith’s totals would’ve been higher as well.

As odd as it seems, Rashan Gary’s injury may have bought Preston Smith at least one more year in Green and Gold. Who knows how quickly Rashan Gary will fully recover. He might not be ready to go till week 1, and even then, he could be on a snap count. Granted I believe he’ll be ready by training camp; I’m not a doctor and setbacks are possible. Given that case, the Packers may want Smith there to rush the QB early in the season until Rashan Gary is 100% ready to go.

Alright, let’s get down to it. What exactly would a restructure for Preston Smith look like? Well, a restructure could save the club around $6M. However, future salary numbers could jump to around $14-15M. This could be a bit of a risk given Smith’s age, but let’s be honest, all the adjustments made year to year, that number itself could even change.

You’ve already read my takes on the situation of the other players around Smith. The future at Outside Linebacker for the Green Bay Packers could be Rashan Gary opposite Kingsley Enagbare. Which right now, looks pretty good. But with Gary’s injury, and Enagbare’s inexperience, what does that look like for 2023.

Here’s what I think. I truly believe restructuring Preston Smith is in the best interest of the team. The future numbers at this point look a little scary, but that’s what they pay Russ Ball for. And Russ Ball is damn good at his job. The number predictions I have could be way off by the time Ball gets ahold of them.

My reasoning is the unknown. The future looks very promising for Rashan Gary and Kingsley Enagbare, but as I said before, Rashan Gary might still require some time to fully return to form. In the meantime, it would be great to have Preston Smith available even if on a rotating basis to assist with that transition. Regardless though of a restructure, I think 2023 is Preston Smith’s last year as a Packer. Unless he has a record-breaking 9th season, 2024 will likely go on without him.

What Exactly is Brewing in Aaron Rodgers' Head?

Some of us are old enough to remember an offseason saga for the Green Bay ...read more 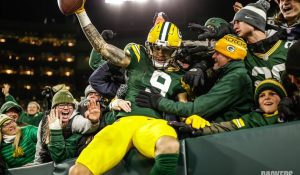