Things did not start out well for Mike Holmgren in Green Bay.

Hired as the new Head Coach by General Manager Ron Wolf on January 11, 1992, Holmgren brought to Green Bay a resume that was as impressive as there was in the NFL at the time.

A former QB coach and offensive coordinator with the San Francisco 49ers, Holmgren was instrumental in the coaching of Joe Montana and Steve Young during the 1980s and 1990s. Four Super Bowls later, Holmgren was THE hot assistant coach in the 1991 off season. His hiring was supposed to bring new life into the Packers’ franchise which had seen limited success over the past two decades.

Success was limited for Holmgren in Green Bay as well-at least to start.

His team stumbled out of the gate at 0-2, with two rather unimpressive games against the Vikings and Buccaneers. Quarterback Don Majkowski, the “Majik Man” from 1989 was hoping there was still a little majik left in him, and was put in charge of leading the new offense installed by Holmgren.

As fate would have it, Majkowski would barely get the chance to show if he was capable of recapturing the majik from 1989.

Crumpled to the ground in the third game of the season against the Bengals, Majkowski left the game, never again reclaiming his starting spot. Second year quarterback Brett Favre, acquired the previous February entered the game, leading the Packers on a ferocious 24-23 come from behind victory in the process.

And the rest, as they say, is history.

The 1992 Packers ended the season going 9-7, barely missing the playoffs. However, this was beginning of the end of the long winter that Packers fans had been hoping for.

So sit back, relax, and enjoy highlights from the beginning of the new era Green Bay Packers: the 1992 season.

When you are done watching, be sure to head over to AllGBP.com and check out this week’s edition of Surviving Sunday: Packers News, Notes and Links for the Football Deprived. It is a must read every Sunday during the off season. 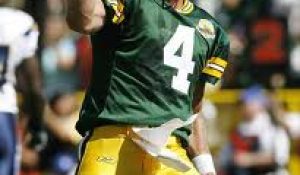 Brett Favre Opens Up About the Past, Present, and Future

Ever so slowly, the Packers and Brett Favre are inching closer toward a reunion. The year ...read more