Former Packers Safety Nick Collins has not played since injuring himself in the 2011 season.

He is hoping his inactivity will soon come to an end.

Collins took to Twitter late Monday night, declaring himself ready to play and “dominate” in the process: 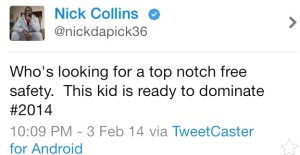 This was the second tweet Collins had made on Monday in an effort to gain some interest around the league:

A former second round draft pick by the Packers in 2006, Collins became one of the top Safeties in the league during his career, earning 3 Pro bowl invitations and playing a key role in the Packers 2010 Super Bowl Championship season.

Unfortunately, his career was cut short by a neck injury sustained against the Carolina Panthers in the third game of the 2011 season. He underwent neck fusion surgery shortly after the injury, and has not returned to the playing field since.

The Packers released Collins in April, 2012.

Collins has stated several times since the surgery that he would like to play again, last night being the most recent. Despite his agent saying that his playing career is most likely over, Collins appears determined to return to the playing field at some point.

The issue is whether he is cleared by any team to play, despite saying that he is 100% healthy as recently as last July:

Being 100% healthy and 100% healthy enough to play and cleared for contact are two completely different things, and that seems to be what is preventing Collins from returning to the NFL at this point.

If Collins were cleared for contact, there is a team which resides in Northeast Wisconsin who should not hesitate for one second about calling Collins and at least giving him a look. After the atrocious play at the Safety position in 2013, the Packers would be fortunate to have someone with the resume of Collins patrolling the secondary once again-even if he has not played in over two seasons.

This story will be one worth watching this off season.

6 thoughts on “Nick Collins Wants to Play Again-Will He Get the Opportunity?”