Being a Packers fan is truly a unique experience.

Packer fans bond with their team in a way all other teams do not experience. We bleed green and gold. We erect shrines in our houses in honor of our favorite team. We take pride in being called cheeseheads.

Being a Packer fan is part of our being. It is a badge of pride we all wear and show off for all to see.

Most if not all Packer fans also share the unique skill of being Armchair General Managers to some degree. We all have ideas of the personnel moves we would make if given the opportunity to run the team, salary caps and drafts be damned.

For the most part, the suggestions we offer are logical, regardless of the price. Picking up this player in free agency or that player in the draft would solidify the team for years to come, with the hope of multiple Super Bowl titles on the horizon as as result of these fantasy GM transactions.

Most of the ideas make sense to some degree. Most of them.

And then, there was this one.

What you are going to read is an actual comment about what the next step the Packers should take during this off season. It is one which is so incredibly wrong, it may very well be the worst idea ever for the Packers.

Keep in mind this is idea is from a self proclaimed Seahawks fan, and one who would appear to be a troll at first glance. But his/her thought process is laid out so well, it seems as though quite a bit of time and effort was spent constructing this horribly piss poor idea. Whatever the case is, it is so bad. So, so bad…

The name of the person who left it is being withheld to protect their identity: 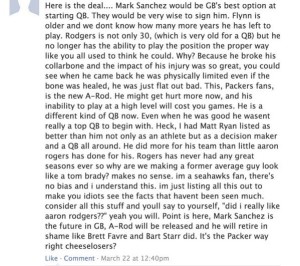 Everyone is entitled to their opinion, especially when playing the part of Armchair GM. But there is so much wrong with this, it is impossible to pick a starting point.

Is this the worst idea ever for the Packers? You decide. Leave your thoughts in the comment section.