In the wake of the Miracle at Motown, one of the greatest single plays in recent Packers memory, fans are once again feeling up about their team. The dark clouds which have obscured the Packers’ offense have dissipated, and all is right at 1265 Lombardi Ave. Such is the power of one awesome display of the mighty arm of Aaron Rodgers.

This one single play, however, has eclipsed the fact that the Packers’ offense spent nearly all of last Thursday’s game in the same hole that they’ve been in since starting the season 6-0 (a hole which was dug perhaps even before that). The team was able to get Richard Rodgers going, a trend which culminated in the miracle play at the end of the game. However, apart from that, the same old demons are all on tape: receivers not getting open, drops, missed throws, poor pass-protection, bizarre play-calling, especially on 3rd-and-short, etc.

Another constant was the body language of the offensive players. The fighting, chip-on-his-shoulder attitude of NFL MVP Aaron Rodgers had been missing for awhile. So had the Mario jump, the belt, the smile, the fun. Rather than going out and exerting their will upon opposing defenses, the offense (and Rodgers in particular) have looked as if the game is something being unleashed upon them. Erin Andrews noticed the dejection on the sidelines as far back as five weeks ago against the Panthers.

Cue the Miracle in Motown. Yes, the play gave Green Bay a crucial late-season win over a division opponent, keeping the Packers neck-and-neck with the Minnesota Vikings for first place in the NFC North. But it was also a collective unburdening for the offense, and by extension, the entire team and its fanbase. It wasn’t a sigh of relief, but a wild outburst of pent-up frustration turned to joy. 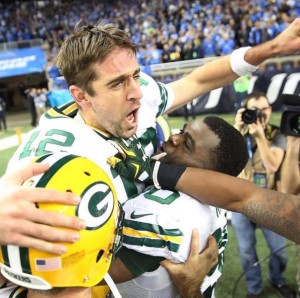 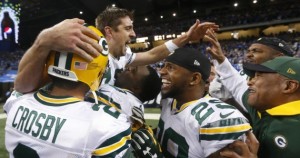 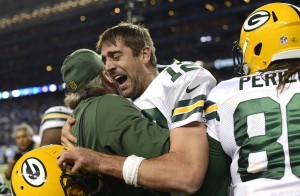 That’s emotion that we haven’t seen in awhile. Some might say that this game wasn’t a must-win, and it certainly wasn’t anything like a playoff game, but the importance of winning it, and winning it in this way, was written on the faces of the players.

As the entire team piled up in the endzone on top of Richard Rodgers, Clay Matthews and Jake Ryan were hugging each other jumping up and down, Mike McCarthy joined his soldiers on the field with a mile-wide grin, and one player chucked his helmet up toward the rafters like a graduate celebrating the end of a long road. If it wasn’t already apparent that the team was feeling the pressure, the response to this one play, that palpable relief, proved without a doubt that they were.

The question remains: how much of the offensive ineptitude is attributable to that pre-“miracle” malaise? Certainly there have been interruptions to the success of the offense caused by injuries, bad play-calling, and failures to execute. But anyone who thinks that emotion and attitude don’t affect individual play and team cohesion is missing a vital piece to the game of football. Perhaps the mechanical errors of the offense had given way to a despondency that made overcoming the errors that much more difficult. A look back at the last six weeks or so certainly leaves one with the impression of a team snowballing under the weight of its disappointments. Each week the frustrations grew, and the offense dug that proverbial hole deeper and deeper.

One thing is for certain: the post-game jubilation erased that weight, if only for a few hours or days. If that weight has contributed to the lack of production on offense, maybe, just maybe, the relief provided by that Rodgers to Rodgers moonshot may be what was needed to snap the Packers’ offense back into gear. If any single event could do it, that play would be it.

For a team that was one mistake from playing in the Super Bowl last year, a team featuring an improved defense, the prospect of returning to offensive form is a formidable one. On the other hand, another flat start to a game may sour the heroics in Motown and ground postseason expectations for the Green and Gold.

While the answers to these questions will come when the Packers host the Dallas Cowboys at Lambeau Field this Sunday, until then, I know that I’m going to bask in the glow of that one glorious play a little longer.

One thought on “The Emotional Power of a Single Play”