If Ted Thompson does truly draft the best player available this coming April, guessing the position, let alone the player that they would take with their first few selections in the NFL Draft, is almost a useless exercise.

However, the lack of weapons surrounding Aaron Rodgers is an overwhelmingly obvious weakness and in turn, the focus of this series which will simply highlight receivers and tight ends that (to date) seem like they have some chance of being on the board when the Packers are on the clock and might make sense given their skill set.

Listed at 6’2, 200 lbs., Boyd checks out well in the size category, though at his height he could likely add some bulk. As you’ll see, even with the measurables of a somewhat ideal perimeter receiver, a good amount of his production came in the slot. There was also a fair amount of usage of Boyd as a ball carrier – which highlights versatility and how important it was for Pittsburgh to get the ball in his hands – and sparingly as a punt and kick returner.

It seems that so far, Boyd has not been talked about amongst the likes of Laquon Treadwell, Josh Doctson, and Corey Coleman as first-round talents that should make an instant impact. But there are a lot of skills in his game that should translate well to the next level and a consistent level of production that would leave one to believe Boyd could be productive as a rookie in an NFL offense.

Boyd was clearly impactful from the get-go, and his production is consistent throughout his career. That’s a pretty positive sign, especially considering his impressive numbers as a freshman were with an NFL-caliber quarterback in Tom Savage (selected by Houston in the 4th round of the 2014 draft, 135th overall), but they did not drop off with lesser quarterback play.

Boyd was a really fun player to start this series with not only because he fills a need for the Packers. is slightly underrated and has a realistic chance to be on the board when they make their pick in the first round – and who knows, maybe even the second – but also because there is a good amount of tape, courtesy of Draftbreakdown.com, of him against the 2015 Jim Thorpe Award winner and (likely) future NFL corner Desmond King of Iowa.

Let’s first take a look at some of the good and bad from that “best on best” matchup from this past fall.

Here we have Boyd working against press coverage from King in the left slot.

Boyd sets King up with a quick outside release, stabbing to King’s right and forcing him to step wide while trying to jam with his left hand. This leaves King susceptible to getting beat inside, as Boyd then immediately disengages with an efficient rip move thus opening up the seam for an easy first down completion.

A positive play against good competition, no doubt, but ideally you would like a taller receiver like Boyd to have a lower pad level as he comes off the line against the press to not give DB’s his chest plate as a target for an initial punch. We’ll see another example of him being a little high on his release against press coverage later on and go a little more in depth on small nuances of an NFL receiver.

Now, Boyd against off coverage from King:

This one doesn’t need much explaining. Based on King’s hips being open to the field and not the sideline and him seemingly peeking in the backfield, it looks as if Iowa is in a Cover 3 look with King having the deep third to Boyd’s side.

Boyd is running a post-corner here. Off his initial stem inside, he does a nice job selling the post, taking two strides and forcing King to commit to it. Boyd is fluid enough in the hips to be able to break back to the corner almost seamlessly, and King is beat with his hips turned. That’s no-man’s land for a corner, and even with a quick recovery, at the NFL level the ball would be out immediately and Boyd would be considered wide open.

He taps the toes and completes a well-run route with another completion for a first down.

A pair of picks:

Above is a similar look coverage wise, with Boyd running a stop and go.

At the very least, you could say that Boyd competes for the ball but King has him completely boxed out and was never really threatened by the head fake and the pumping of the arms when Boyd tries to sell the hitch.

Whether running an actual curl or running a stop and go, selling the route is of the utmost importance. You can argue that Boyd leaves a bit to be desired in terms of selling the curl, as the pump of the arms and patting of the feet isn’t as violent and abrupt as most elite route-runners would have it.

Now, to another interception from King….

I’m not sure if you could pin all the blame on Boyd for this King interception, as the ball probably should never have been thrown.

However, Boyd could have done a better job giving his quarterback a semblance of a window to throw to by flattening out at the top of his route, as opposed to continuing to drift to the goal post, allowing King to undercut the throw.

By taking a flatter angle, Boyd could have attempted to shield King with his frame and at the very least been in better position to prevent an interception.

These aren’t things that are always commonplace at the collegiate level, but are instead underrated intricacies of an NFL receiver’s game.

Overall, both players were productive in this matchup with King having two interceptions and Boyd finishing the game with 10 catches for 131 yards and a touchdown.

Here is that second example of Boyd being a little high with his release against press coverage, but ultimately getting away with it:

This time, Boyd is running an out route, taking an inside release against UNC CB Des Lawrence.

Boyd is a little high and Lawrence ends up having a solid target, but ultimately getting a piece of his facemask. Boyd still gains outside position, though Lawrence does a nice job recovering.

Though the coverage is good, the ball placement allows Boyd to display his strong hands, which is a definite strength of his game overall.

But let’s be a little bit critical of the release.

Look at this freeze frame: 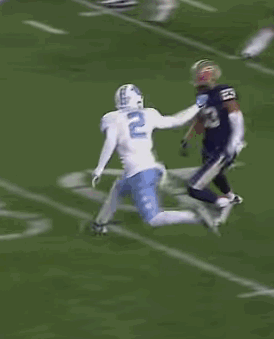 Boys is caught with his shoulders high and his arms down in this instance, just based off of his pad level rising too early after his release. One of the positives about his game at the collegiate level is his ability to beat man coverage and that has to do with his precise route running and also his strength to beat the press.

However, you have to assume at the NFL level, if a press corner, say Richard Sherman or Patrick Peterson, were not threatened by Boyd’s speed and maintained a balanced base off his initial release, they would be able to deliver a jam to Boyd that could alter his route and prevent him from gaining outside positioning to be able to run the out route in this instance.

Here’s a few (Packers) examples of the type of pad level you’d be looking for at the NFL level:

You can see Nelson’s right shoulder is low enough, almost always at least even with Jeremy Lane’s, as to not give him a solid target to jam with his right hand. This allows Nelson to still rip through the jam, and while even stumbling out of his break, still creating separation for Rodgers to throw the ball.

As Jared Abbrederis shakes former Packers DB Will Blackmon (yes, he’s still playing football), he sinks his hips and squares his feet and ultimately gains a completely free release to the inside for an easy score. Again, not leaving Blackmon much of a target for a jam and catching him completely off balance. This is the type of thing you’d like to see from Boyd as he progresses and develops at the next level.

Yep. All hands. Tight coverage, ball placement maybe a touch more inside than you’d like, which actually gives the defender a chance to make a play on the ball but as is often the case with Boyd, he attacks the ball with his hands and plucks it clean for another sideline grab and a first down.

Here, he high points the football and pulls it into his body going to the ground. The zoomed in slow-mo replay gives you a great look at the slight detail of a polished wide receiver, shielding the ball from the defender to avoid a breakup after the initial catch,

Boyd also understands how to use his frame, and is comfortable catching the football in tight windows. For instance, this slant route:

He does a nice job giving his quarterback a target here and using proper body lean as the ball is arriving to ensure that the defensive back can’t make a play on the ball.

These are things that I think would make Boyd a productive possession receiver and potential a weapon in the slot, as coverage and windows are often tighter and contact usually follows shortly after a catch.

Overall, Boyd is versatile, doesn’t show many flaws in his route running, and has exceptional hands, which make him a viable option for an NFL offense.

In the context of a potential Packers WR, some of Boyd’s production on timing routes and against man coverage would probably bode well for an offense that lacked rhythm and routes being won by wide receivers.