It’s been a little over twenty-four hours since ESPN’s Jason Wilde and Rob Demovsky broke the news that Packers quarterback Aaron Rodgers underwent surgery on an injured left knee. So instead of finding some half-hearted excuse to duck out of the Pro Bowl later today, he really did have a legitimate reason to sit out.

As ESPN reported, it appears Rodgers had a minor–emphasis on no big deal–procedure to, as they put it, “clean up an old injury.”

Did he play hurt all year? Unless he divulges more, the world will never know. As far as old injuries, Rodgers sustained an ACL tear when he was in high school on January 2, 2000 during a pick-up basketball game on a school playground.

He rarely talks about it, but mentions it in a letter to his younger self that was published in ESPN magazine. He actually played with a blown knee for part of high school and college.  An injury like that isn’t a pain issue, it’s one of stability.

A blown ACL makes the knee feel like it is going to give out. So it is either braced to give it stability for sports or it’s surgically repaired. 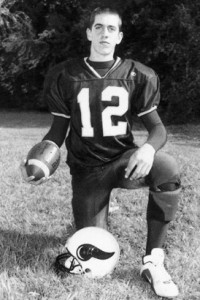 It wasn’t until 2004, as ESPN reports, that he underwent ACL reconstruction. If you look closely at some of the high school photos, it’s there, a bulky brace taking the place of a repaired knee hidden in plain sight.

Before you start freaking out that Aaron Rodgers has joined Jordy Nelson on the walking wounded with an ACL injury, take one step back from the ledge. He didn’t blow his knee out again. There is no such thing as a minor ACL repair. It’s like being pregnant–either it is or it isn’t. At Rodgers’ age, you either blow out your knee or you don’t. And from the sounds of it, he most certain did not.

But a knee joint that has sustained an ACL tear isn’t normal. Other injuries can occur when one injuries the ACL. You often hear about the “terrible triad’ with ACL tears. In addition to the ACL injury, there is a torn medial collateral ligament (MCL) which straps the thigh bone (femur) to the shin bone (the tibia) on the inside of the leg and a torn meniscus–the cartilaginous pad that rests on top of the tibia to help cushion the joint. And then there are variations on a theme. Rodgers likely didn’t have a terrible triad, but it is possible to have the less evil cousin of a torn ACL and meniscus injury.

So what exactly is going on with Rodgers’ knee?

At this point, it’s just an educated guess. But “clean up” to me sounds like a minor procedure where either there is a flap of meniscus (or a floating bit of it that has broken loose) caused by an injury that occurred somewhere between that initial basketball game when he was 16 and the Packers’ loss a few weeks ago in Arizona that finally was irritating enough that it needed to be fixed.

This type of injury is not nearly as debilitating as an ACL tear. They are irritating and painful. Essentially, it’s a bit of tissue that pinches and gets in the way of the normal movement of the joint. The knee can feel stiff or swollen, it hurts to twist or rotate. Sometimes you can’t fully extend the knee. And it doesn’t hurt all the time, just when you turn a certain way, or squat a certain way.

Then there’s the fact that the meniscus gets more brittle in middle age and beyond, and is more easily injured with  even trivial twisting or squatting. (Case in point, the author pleads the Fifth when it comes to her own meniscus issues.)

So who knows how long Rodgers has dealt with pain. And why he didn’t show up on an injury list is anyone’s guess. He may have just dealt with it without telling anyone and finally got sick of it and finally confessed to the medical staff. It could be something that has bothered him for years, or it it could be more recent. And did such a knee problem impact his play this year? I doubt it is the entire reason for his mid-season slump. After all, an irritating knee doesn’t make a quarterback see ghosts. But it probably was a factor. 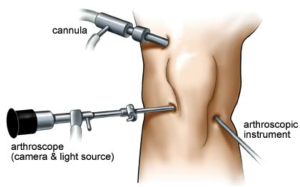 Unlike his previous ACL reconstruction, Rodgers’ recent surgery sounds quite minor. A arthroscopic (arthro = joint, scope=to look) procedure is typically a same-day surgery. Small incisions are made into the knee ejoint and arthroscopic tools–typically a visual scope, an surgical device and an irrigating device which are all about the diameter of a pencil are inserted into a knee joint. Free floating bits of flotsam (pieces of cartilage or even chips of bone) can easily be removed. Small torn flaps of meniscus that get caught in the joint and cause pain can be trimmed away, and larger tears to the meniscus can even be stitched back together. 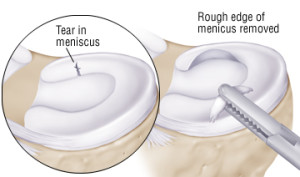 And the end of the day, it’s a couple of bandaids, a pair of crutches for a short period of time and couple of days with the leg up  with an ice pack watching crap soaps, Netflix or whatever ESPN is airing during the day and the recovery period is already underway.

Recovery for such a procedure is gauged in weeks, not months like an ACL repair. Per Demovsky and Wilde, Rodgers is already on target to return to OTAs in April without missing beat. He’ll be healed up and ready to go long before that. In fact, he’s already listed as one of the participants in the AT&T Pebble Beach Pro-Am golf tournament that is scheduled to start February 8. There’s a possibility he could still scratch the event, but the fact that he is listed already is a pretty good sign that things are going well from his knee’s standpoint.

That said, take a page from the great philosopher himself and RELAX. A repair along these lines is pretty minor, and not surprising considering the history of that knee. Expect Aaron Rodgers to ready, willing and able to hit the field for the OTAs this coming spring.

2 thoughts on “RELAX when it comes to Rodgers’ knee surgery”