The  Green Bay Packers’ season ended a few weeks ago, but the 2015 NFL season will come to a close this weekend with Super Bowl 50. And with that will begin the 2016 season a month later.  With that will begin the guesswork of who stays and who is shown the door. Teams will start bidding and trying to woo free agents with the promises of championship rings, each touted the missing link that will carry their new team all the way to Super Bowl 51.

And the yearly question will arise once again: will Ted Thompson pull the trigger finally and sign some talent that is not homegrown?

Draft and develop, it’s been the Packers’ mantra forever. Find that diamond in the rough and polish it until it shines. There’s no question Thompson hit pay dirt with Aaron Rodgers, Randall Cobb and Demarious Randall. But then there are still big question marks over some of his other picks–Nick Perry, Datone Jones, Eddie Lacy and Davante Adams. And then there were complete busts as well.

By now everyone has read the Bob McGinn article that was published in the wake of the Packers’ loss to Arizona. He pointed fingers at both Mike McCarthy and his deficiencies as the head coach. But he also placed a lot of the blame at the feet of Ted Thompson.

Is Thompson too rigid in his draft and develop mentality that his refusal to search the free agent market for talent is now becoming a boat anchor that will sink the team’s success?

It doesn’t take a huge look into Packers’ history to see where gambles in free agency have paid dividends in championship runs: Reggie White and Charles Woodson easily come to mind.  And then there are also the second tier free agents that also played significant roles in those runs. Would the 1996 Packers be the the same team without Andre Rison?

While it’s noble to think draft and develop is an absolute recipe for success, the inflexibility to see beyond that can also sink organizations.

Instead of football with a franchise quarterback that has the talent and abilities to carry a team, let’s look at this from a different perspective and how rigidity in thinking is not a good thing.

Instead of a quarterback, let’s say this star player is a surgeon. This surgeon is absolutely amazing. People come from around the world to have him fix their knees and shoulders. He has a low complication rate. The outcome is typically stellar, and he’s well liked and respected by his staff.

But this surgeon works for a large corporation that is having a bit of an economic downturn and clinic announces there is a hiring freeze. There will be no new hires. Departments will just have to make due with the staff they have. Sorry gang, no playing favorites here. It’s just business.

Unfortunately, this news came as the surgeon’s right hand–his scrub nurse is retiring. A second nurse is on medical leave for 12 weeks, and his third nurse is a new grad. She graduated at the top of her class, had her pick of job opportunities, but is still very green. She’ll be as good as his former right-hand in a couple of years, but she needs to develop her skills a bit more.

Since there is a hiring freeze within the corporation, he is turned down by the higher-ups when he requests to fill his retired scrub nurse’s position. He’s reminded that his other nurse will be back in June. As for the other position, they’ll see if they can fill it with a nurse from the float pool. It wouldn’t be a new hire, but some of the floats have OR experience.

Things seem okay for a while. But the float nurse doesn’t know the difference between his butt and a hole in the ground. He seems lost in the OR. Oh, that’s right, he was has 10 years of cardiac surgery experience, but no orthopedic experience. And the rookie screwed up the sponge count on the last surgery, and the surgeon had to reopen the patient to find the missing gauze sponge.

The complication rate starts to go up with the surgeon’s cases. Mrs. Baker’s knee got infected. Mr. Smith had a bit of the drill break off in his hip. And the surgeon is just waiting for the lawsuit that will likely come because the rookie marked the wrong knee prior to surgery and the surgeon cut into the wrong shoulder. Thankfully it was caught in time before he got the saws out!

The mistakes and downturn in quality start to wear on the surgeon. He’s not as nice of a guy any more. In fact, he’s a bit of a jerk. He’s quick to snap at the OR staff. He’s thrown instruments at a nursing student because he got in the way. The surgeon no longer has the reputation of being a great guy everyone likes to work with. He’s a bit of a jerk, and no one in the OR–including his peers–want to work with him any more.

So he goes to his department chair, begging for new help. But again he’s told, sorry, you’re going to have to deal with the staff you are dealt. Of course he could work on his own interpersonal skills, because everyone thinks he’s a bit of an ass right now.

Of course comparing football to orthopedic surgery is a bit like comparing to apples to hippopotamuses.  Things like this–and the resulting fallout–happen in corporate America all the time. Work with less. Be happy you have the staff you did. If you just each work a little harder, you’ll be more successful. It’s a mantra many of us hear all the time. 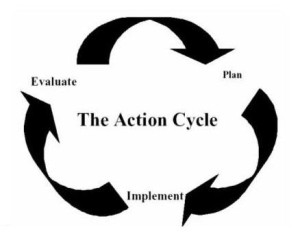 But this problem is amplified when the end product is measured in only 16 3-hour regular season increments. There are only a finite amount of games to “work with less” before that experiment is deemed unsuccessful. Using another business model of Plan, Implement, Evaluate, the Packers–or any NFL team for that matter– have a very small window to evaluate and then modify a plan.

With Thompson, it’s as though he starts at the top of the cycle, but never brings it full circle. Plan = draft, Implement = let the rookies play, Evaluate = ?

The loop never returns to the top. Well, it does, but it goes back to Draft, Develop, Rinse and Repeat.

What if that model is broken?  Where did the evaluation of the plan go?

The Packers cannot keep settling for a simplistic business model, let’s face it,  Aaron Rodgers isn’t getting any younger. His window to carry the team to another Super Bowl is starting to close. It’s not closed by any stretch of the imagination, but that opening gets a little more narrow each passing season.

Wouldn’t it behoove the team to step beyond the “do more with less” model that seems to define the Draft and Develop philosophy and play a more proactive role in surrounding their franchise players with the tools and talent to succeed on both sides of the ball.

Of course free agency is defined by salary caps. But the team can still seek out better talent. That means taking bold moves–trying to sign blue chip veterans that hit the market. And it also means cutting losses even if the player has a first round draft choice stamped on his forehead.

It means not being mired in the past but rather looking forward toward possibilities.

The 2016 Packers season is about to start. Free agency is only a few weeks away.  Will Ted Thompson be happy to once again work more with less, or will he be willing to look at different models to develop a championship team.

9 thoughts on “Does Thompson Really have a Free Agency Phobia?”