There seems to be some uncertainty in Green Bay Packers’ coaching staff for next season, but one thing we know for sure is they will have a new Defensive Coordinator. There are a lot of names being thrown around, but most of those coaches favor a 3-4 system. I wanted to take a look at how the Packers could transition to a 4-3 defensive system.

First, the strength of the Green Bay defense this year has been the Defensive Line. Mike Daniels and Kenny Clark have been the only true impact players, and I think it would make sense to try to put them in position to make plays instead of occupying double teams. Clark could easily transition from Nose Tackle to Defensive Tackle. He demonstrated pass rush ability in the few opportunities he got. Haloti Ngata made a similar transition in Baltimore, and Clark is every bit the athlete Ngata was.

Mike Daniels versatility would also be a plus in the 4-3. He has the ability to play Defensive End in running situations, but would be a devastating pass rusher from the interior. Aaron Donald is the gold standard as a pass rushing DT, but Daniels has all the ability and tenacity Donald possesses (without the opportunities). Dean Lowry might be a tweener, but I would give him the chance to be a strongside DE. Montravius Adams could transition to DT.

The Packers are already hurting for pass rushers, so it’s no surprise they would be weak at Defensive End. Nick Perry is probably better suited to play DE in a 4-3, then standing in a 3-4. He has the strength to hold the end, and the ability to rush the passer. It would also help to get him out of pass coverage situations. Kyler Fackrell, Vince Biegel, and Reggie Gilbert are undersized for the 4-3. Fackrell is guy who doesn’t belong on a NFL roster. Biegel may be better suited as a 4-3 Outside Linebacker after showing some limitations in pass rush. Gilbert showed some serious flashes, and I would love for him to get an opportunity to be a pass rush specialist in sub packages (even if he can’t make the transition to DE).

Linebacker may be the thinnest spot on the entire team, which is why it makes sense to have three starters instead of four. Blake Martinez is a tackling machine who would be a fit on the outside or in the middle. Jake Ryan has not looked like a player capable of starting in any system. Clay Matthews is likely to be cut due to his salary cap hit, but he could be a Linebacker in the 4-3 and move to pass rusher in sub packages.

The secondary will be more impacted by the type of coverage the Defensive Coordinator prefers, rather than the alignment of the front seven.

The gaps in the front seven could largely be made up through some reasonable acquisitions in free agency and through the draft (the Packers are likely to have 12 picks this year).

After Green Bay hires their next General Manager they will have to determine whether to keep Mike McCarthy. However, their biggest decision may end up being who the next Defensive Coordinator will be. That person will be tasked with improving the defense enough to give Aaron Rodgers a chance to win his second Super Bowl. A 4-3 defense may be quickest way to get the defense to that point, and bring another title to Titletown. 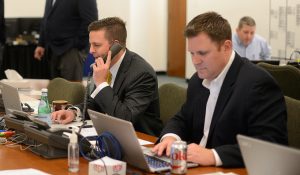 There is a very strong chance that General Manager Ted Thompson will keep his job ...read more

6 thoughts on “The Argument for Running a 4-3 Defense”