Pettine defense's have been successful but they're pressure-based and they use both 3-4 and 4-3 concepts. Lots of flexibility to do numerous things, which means players have to be flexible and football smart. However, in '17 he has been with Pete Carroll, whose D is much simpler.

The hiring of Pettine certainly means that the Packers will not be switching to a full-time 4-3 defense, but Pettine should look to it as an important element of his attempt to resurrect the Packers’ defense.

What would the Packers have to gain in a greater utilization of the 4-3? To put it simply, they would perhaps gain a more consistent product on the defensive side of the ball. It can be argued that the Packers current personnel is better suited to run a 4-3.

The Packers switched to a 3-4 defense coming in to the 2009 season. Green Bay had brought in defensive guru Dom Capers, an understudy of Dick LeBeau and his unique 3-4 front. The Packers immediately added pieces to their personnel puzzle which allowed them to succeed. Among the necessary elements of a successful 3-4 defense are large-bodied defensive linemen who can eat up blocks (even while technically under-matched against a 5-man offensive line) and athletic edge rushers playing the outside linebacker position.

In the 2009 draft, the Packers took BJ Raji with their first pick, a perfect player to fit the role of the stop gap nose tackle. They then moved back into the first round to grab Clay Matthews, a disruptive defender off of the edge. The Packers cruised with this scheme and personnel to a Super Bowl win the next season.

But things have grown stale since then. Clearly some of the blame has been put at the feet of Capers himself, but it also seems likely that at least some of the problem has been the changing face of the Packers’ personnel group.

Former NFL cornerback Bryant McFadden spent much of his career playing out of the 3-4 for Dick LeBeau’s Steelers. In 2011, his final year, McFadden pointed to the unique importance of the players on the field for the success of a 3-4 defense. “You see a lot of teams trying to run the 3-4, but they aren’t successful because of the personnel.”

On the surface, this may sound as redundant as saying that water is wet. Of course the success of any defense requires that it be run by good players. However, McFadden’s point is that the success of a 3-4 defense hangs on a number of relatively specialized roles that general managers and coaches can find hard to fill.

These are the sort of players that the Packers had in the first several years after their switch to the 3-4. Guys like Raji and Ryan Pickett were behemoths up front. The middle of the linebacking corps was manned by the consistently hard-nosed AJ Hawk. The Packers had Clay Matthews flying around the edge to the QB. Nick Collins was the prototypical play-making safety, and Charles Woodson was as aggressive and sure as a tackler as he was a cover corner.

But consider how much the face of the Packers defense has changed in recent years. Its strong suit is a play-making defensive line. It would be hard to argue that the Packers’ two best defensive players are not Kenny Clark and Mike Daniels. Raji and Pickett pushed 340+. Clark and Daniels are not only nearly 30 pounds lighter, but they are disruptive players utilizing speed and strength to get into the backfield and make plays. Combined, they accounted for over one quarter of the entire defense’s sacks in 2017.

Gone is the hard-nosed AJ Hawk. Now the Packers have a rangy, more athletic inside linebacker in Blake Martinez. Gone is Clay Matthews’ burst to the edge. He’s still an important element of the Packer defense, but he’s not the pass-rusher that he used to be. Gone is the play-making safety. And the physicality and tackling ability of the Packers’ current cornerback corps certainly leave something to be desired.

Imagine the base 4-3 defense below. Immediately the Packers put an extra defensive lineman on the field. Daniels can continue to play 3 technique, but Clark can be moved around to play anything from a 1 to 3 technique, depending upon the play. Clark is big enough to eat two guys but can also get to the quarterback from the more pass-rush friendly 3 tech.

Perry puts his hand in the dirt where he excelled in college, but is still able to rush the quarterback from the right defensive end position. Lowry can play the left defensive end on early downs and be replaced by someone like Ahmad Brooks or Reggie Gilbert on passing downs, giving the Packers a little better pass rush when they need it.

In this scheme, Clay Matthews moves to the Sam or strong side linebacker spot. He can be blitzed from that location on passing downs, but his strength and quickness will help the Packers against the run. Martinez plays Mike or middle linebacker. He’s the best all around linebacker that the Packers have. Josh Jones is plugged into the Will or weak side linebacker role, which, arguably, he was born to play. Jones is a fast, hard-hitting player. He’s been exposed in coverage as a safety, but he’s more than capable of the coverage duties of Will LB.

Jake Ryan falls out of this scheme, but would be a very serviceable back-up for both the Mike and Sam positions, providing valuable depth. When facing strong run formations, Ryan could even come in to play the Will.

In theory, this works to the advantage of nearly every player in the Packers’ front seven. While it should boost the Packers’ ability against the run, it may also provide a better chance for consistent quarterback disruption than the Packers are currently getting out of 3-4 look.

Peter Bukowski had made a similar pitch over at Acme Packing Co. back in October. Indeed, even if the Packers do not want to switch to a base 4-3, they can utilize a 4-3 as part of their defensive repertoire. As Bukowski shows in the image below, the Packers have already essentially used a 4-3 several times this year. Put Nick Perry’s hand in the dirt, and this is precisely the same package as I’ve outlined. 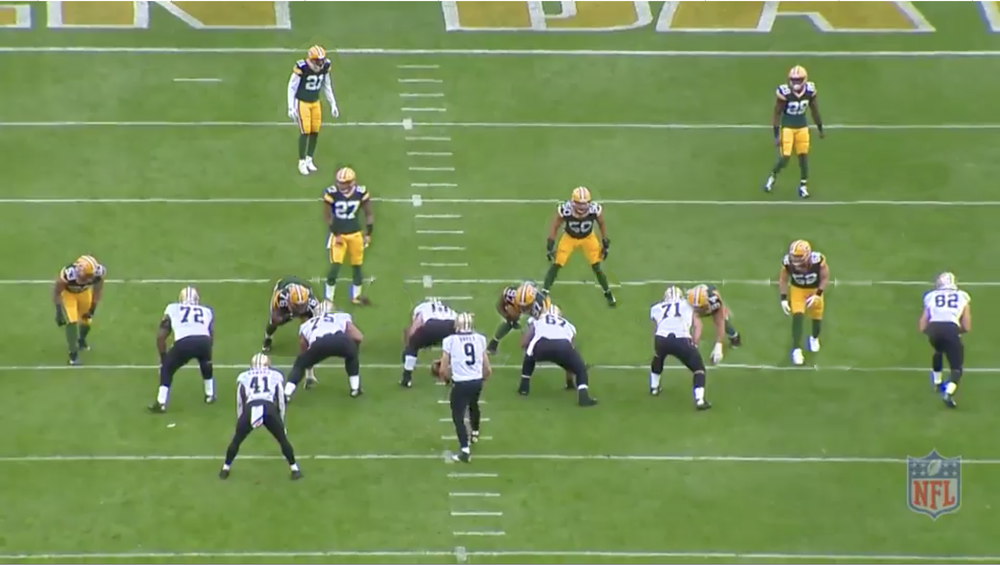 Not only does this look perhaps play to the strengths of the Packers current defensive personnel, it doesn’t require any major additions to be run successfully. If the Packers choose to stick with the 3-4 base, they will need to add some firepower at outside linebacker. Matthews is no longer a game-changing pass rusher. Perry shows flashes, but has a hard time staying healthy and consistent.

Whether the Packers will further utilize the above package will perhaps come down mostly to the personnel that Pettine has to work with. If the Packers enter the 2018 season without having drafted or signed a top-tier, athletic edge rusher, a regular use of the 4-3 front should look that much more enticing. LempsTalkinPack #103: This is the End

Chris Lempesis is back to break down Green Bay's shocking 13-10 NFC divisional round loss ...read more 2 thoughts on “Packers Should Utilize a 4-3 Defense”