When Mike McCarthy talked about the defense during his season ending press conference, he said that it was important for the Packers’ defense to outperform opposing offenses on a weekly basis. That is a tall task for any defense, but the bottom line is defense wins championships. Taking a look at the final 4 teams remaining in the NFL playoffs, Minnesota Vikings, Jacksonville Jaguars, Philadelphia Eagles, and the New England Patriots, all rank in the top 5 for points allowed per game. If you want to play in February, it’s simple, build a top ranking defense.

Take a look at this past Sunday’s games for example, Jacksonville jumped out to an early lead against Pittsburgh thanks to play of their defense. Sacks, interceptions, defensive scores, the defense was ball-hawking, aggressive and flying all over the field. On the NFC side, the Saints defense on the other hand lost it at the end when the defender went for the kill shot instead of wrapping up. That’s for another discussion, but as we witnessed, defenses were outperforming the offense.

Granted, the Packers’ have Aaron Rodgers, an NFL MVP, once in a generation player, so they don’t need a number 1 ranked defense, they just need one that creates turnovers, gets sacks, makes plays late in the game and ranks in the top 10. This year, their defense ranked 26th in points allowed, 22nd in total yards, 23rd in pass yards, and 17th in rush yards. That is not going to cut it, as we have witnessed.

We don’t even have to look back very far to see what a good defense would do for Rodgers and this team. In 2010 when the Packers’s won Super Bowl XLV their defense ranked 2nd in points allowed, 5th in total yards, 5th in pass yards, and 18th in rush yards. That defense included a future hall of famer in Charles Woodson, and playmakers like Nick Collins, Sam Shields, AJ Hawk, Tramon Williams, B.J. Raji and a younger Clay Matthews. It also had quality depth, when one guy went down, there was another guy who would step in and perform like Frank Zombo, Erik Walden, and Jarrett Bush. A defense that gets depleted with injuries usually can’t recover at all during a season, but somehow, this defense was able to sustain great and unwavering defensive play throughout the year. Great defenses led by great players like Charles Woodson, Nick Collins and Clay Matthews win championships and that is what that team did.

Now, back McCarthy’s statement about the defense being better than the opposing offenses. Realistically, the defense is not that far away from being top 15 in the league or better. Mike Daniels and Kenny Clark are playmakers along the defensive line, and Morgan Burnett and Ha Ha Clinton-Dix form and good duo on the back end of the secondary. I am optimistic that new coordinator Mike Pettine can turn Clinton-Dix into his former Pro-Bowl self. When it comes to pure explosiveness, no one compares to second-round pick Josh Jones, who has a rare combination of size, speed and fearlessness. There is also, Kevin King who had his season shortened by injury but was showing promise. Looking at it, the cupboard isn’t completely bare, but it definitely needs restocking with a pass rusher, inside linebacker, and cornerback to start.

After the season that the Packers had, they are now set to pick 14th, which is the highest they have selected in the NFL draft since taking defensive tackle B.J. Raji with the 9th overall pick in 2009. This season could have been a blessing in disquise. With possibly 11 picks in the this years’ draft, it is up to new GM Gutekunst to bring in some more playmakers on that side of the football. 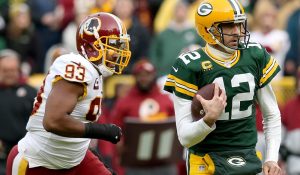 Week 7 in the NFL has arrived. The Packers are a little banged up heading ...read more