Ray Nitschke was mean. There’s an old barber back in my college town in Dickinson, North Dakota who played linebacker for the Detroit Lions back in the 60’s. He still cuts hair to this day. Trust me, you don’t go to Ted’s Barber Shop for the quality of the haircut, you go there for the stories. The man is interesting! One day, I will never forget the story he told me. He’s got some old memorabilia in his shop which sparked me to start the conversation. “Hey, you played for the Lions in the 60’s, huh?”, I asked. He replied, “Yeah, kid…a long time ago.” I asked to tell me about the Green Bay Packers. He said they were a well-oiled machine and all business. Vince Lombardi would march up and down the sideline while the Packers got ready for the ballgame. It was intense, as he described. Ted began to explain a trip to Green Bay where he approached Ray Nitschke. Mr. Nitschke was warming up and Ted walked up and introduced himself, explaining that he played linebacker too. According to Ted and I would have no reason to doubt him, Ray looked at him and growled. He growled! Ted told me that he walked away scared half to death. Ray Nitschke was mean. This 2018 version of the Green Bay Packers defense has to pull from the same cloth. They must get mean. Now, when I say that, I’m not talking cheap shot, hit them late mean. I’m talking “rally to the ball with bad intentions” mean. This Packers team needs to start hitting hard, fast and furious. The best defenses play fast and get to the football in bunches. I look forward to seeing this version of the defense under Mike Pettine’s guidance.

When I think back on my days as a lifelong Packers fan (and I’m 43 years old), what players played defense that I would consider Ray Nitschke mean? There actually are a few, to be honest. I’d start with #26 Chuck Cecil. Cecil played safety for the Packers from 1988-1992. He played with reckless abandon and is famous for some of his pictures with blood streaming down his nose. Check out this video that displays in a nutshell the way Cecil played the game of football.

Another former Packers player that was mean in my mind was #59 Wayne Simmons. It didn’t take a long time to figure out he wasn’t the nicest guy on the field. He played for the Packers from 1993-1997. Unfortunately, his life ended way too soon but he was an enforcer from the linebacker position. We need more guys that play with that kind of chip on their shoulder. Simmons may not have been the best in space or coverage, but #59 would lower the boom on anyone with the ball in their hand. 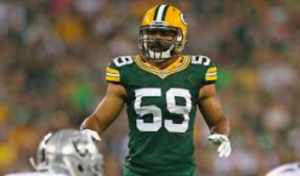 In the end, the Packers have guys on the unit now that play with a mean streak. Heck, we’ve all heard Mike Daniels plead for it almost every year and I’d definitely say that he does. The issue is that there isn’t enough of them. For the Packers to get to the next level, they are going to have to commit to getting many hats to the ball and arrive with mean intentions. Don’t talk about it, be about it! As always, Go Pack Go!